The highest selling compact sedan, Maruti Suzuki DZire has undergone an update. The second-generation DZire didn’t have too many competitors when it was launched. Today, when several new players have come in, the DZire wasn’t as rich in features as some of the competition. So to further raise the ante, Maruti Suzuki has now introduced the facelift version of the DZire. We lay our hands on the petrol version of the DZire facelift to find out, if it really has got a major upgrade? Read further as the mystery unfolds.

The DZire has got a cosmetic upgrade, but there aren’t many changes on the outside. The first thing you notice is the thick chrome slate on the new front grille. The headlamps are now smoked, otherwise there is no change in the shape. The chrome comes on higher trim variants itself, so one might not be able to spot the difference between DZire facelift and the older DZire at one glance. The side profile has only one change, which are the newly designed alloy wheels. At the back there isn’t a major update as the DZire still retains the same styling like before except for the thick chrome lip on the boot. The DZire has got minimal upgrades on the outside and hence not much to speak also. The DZire looks a bit out of proportion as it had to be made under four meters, and this is where it gets the excise benefit. The additional chrome on the titivated version of the DZire isn’t something that we have liked ourselves.

The interiors of the DZire were always premium in styling. This was never an area of worry for Maruti Suzuki, however what was missing were the features that the compact sedan offered. The centre console has a simple layout and has good ergonomics. The Swift DZire still has the same styling and the black and beige dual-tone interiors. After the facelift, it has got several new features like keyless entry, push start and stop, in-dash music system now has bluetooth connectivity and the steering wheel even has additional controls to answer a phone call. Then there is also reverse parking sensor for easier and a lot more convenient parking.

The space on the DZire hasn’t changed as this is a facelift. The DZire has a spacious front row of seats and these are extremely soft, which makes it comfortable to drive and sit especially for short in city trips. The space offered is also good and the second row too has decent space. The second row has good knee room, though the thigh support could have been better. The boot is extremely small and this is equivalent to that of a premium hatchback. Only if Maruti had added some more boot space for the DZire. This is one of the few downsides of the DZire.

Transmission: Five-speed manual for both (Petrol also has an option of four-speed automatic)

The petrol engine on offer on the DZire is the 1.2-liter K-Series that churns 84bhp of power and 115Nm of maximum torque. This engine is one of the most fuel-efficient and powerful petrol engine in its segment when it comes to drivability. This is where the DZire petrol shines over the competition. One doesn’t need to change gears that often when driving in city traffic. This comes with a five-speed manual and an optional four-speed automatic transmission options. The NVH (noise, vibration and harshness) level on this engine are fairly low and driving it in city is highly convenient. The diesel engine on the DZire is the 1.3-liter DDiS that produces about 75bhp of power and 190Nm of maximum torque. This comes only with a five-speed manual transmission. The best bit about the DZire is the ease of driving, with a soft clutch and sufficient power be it while driving in city or even on the highway. The mileage of the DZire petrol is about 13km/l in city while on highway it is about 15km/l, while the diesel is about 17km/l in city and highway it touches 20km/l with ease if driven with a light foot. 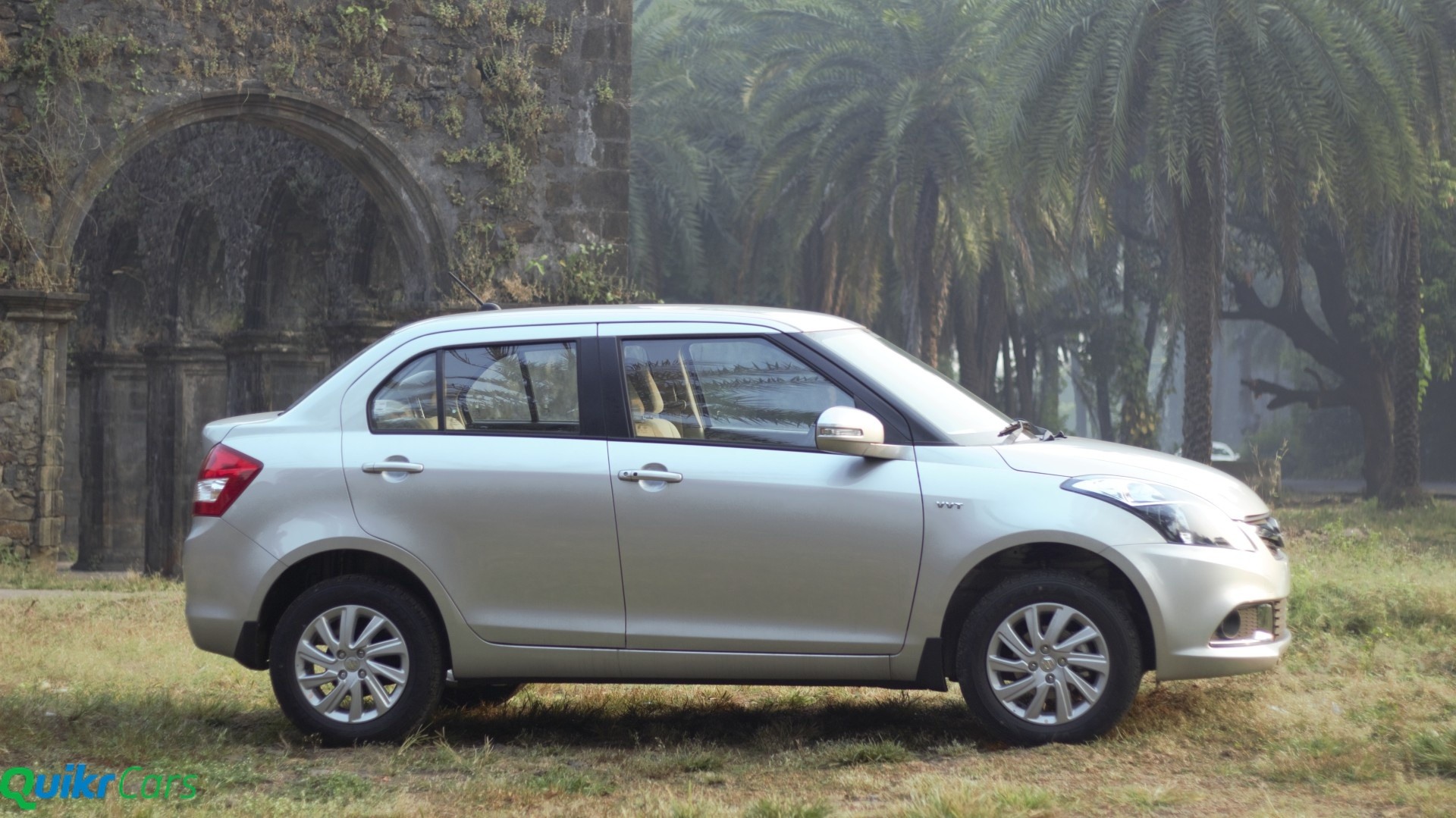 The ride on the DZire is smooth and the rear suspension set-up is softer than front for more comfort for the rear passengers. Drive it on bad roads and you will have a comfortable drive even on bad roads. The handling of the DZire is decent. It doesn’t have the alacrity that its European competition possesses but it is good enough for city driving and even on an open road. The steering wheel is also light and the compact sedan is zippy for driving in tight and busy streets. The DZire has a short turning radius and this makes it a great option to buy.

If you are out to buy a compact sedan, just because it is a three-box then look no further just buy the DZire. It has the best quality interiors, comes loaded with bells and whistles that are useful and has one of the lowest ownership cost. Maruti Suzuki has the best dealership network in the country and at the same time, the DZire will have the best resale value as well. If boot isn’t very important for you, then the DZire remains the best option to pick in compact sedans and especially the petrol one.