We drive the monstrous armoured version of the very luxurious S-class. 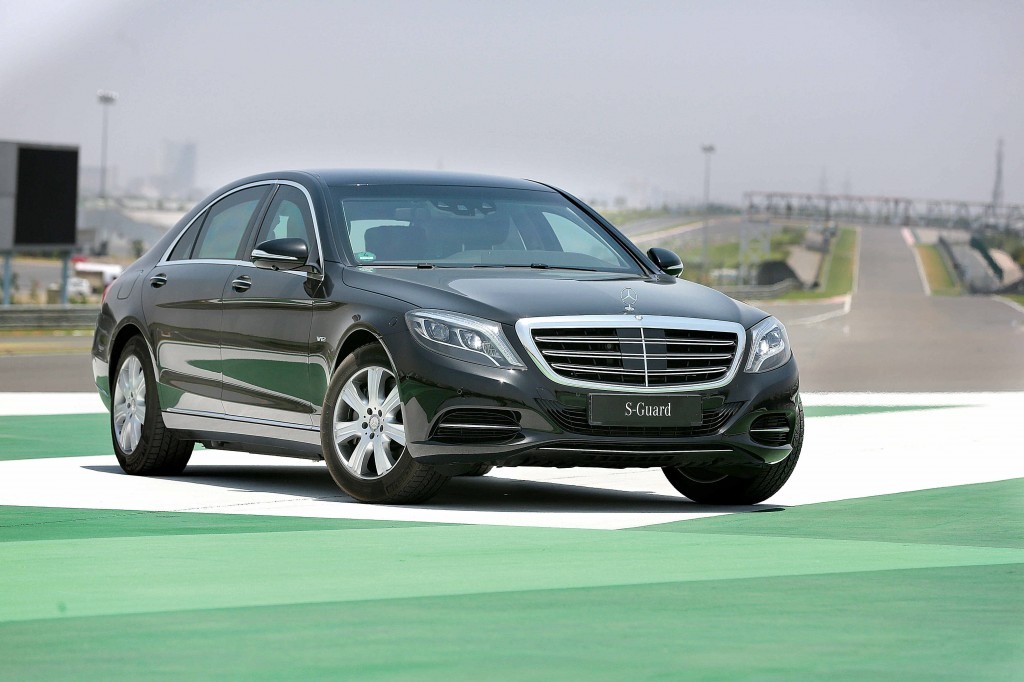 Meet the S-class Guard, an armoured vehicle built to shrug off bullets fired from an AK47, survive landmine blasts, gobble a couple of grenades, and still keep its passengers safe. It is exactly as mesmerizing as it sounds – the car is built to VR9 standards, the highest level of protection a civilian can ask for in an armoured car. There is very little to differentiate it from the ‘ordinary’ car inside or out, save for a few VIP-oriented details like the blue LED flashing lights inside the grille, mounting points on the fenders for flags, and a special array of buttons hidden in the centre console. A generous amount of metal and kevlar has gone into this armoured car to cover every bit of sheet metal and further strengthen the body. The result is its 4.16-tonne kerb weight, which is twice as much as its standard sibling. To cope with the additional mass, there are strengthened axles and tailor-made air suspension. And the Michelin PAX run-flat tyres used in this car get a unique rim that supports the central rib, which allows the car to be driven for 30km with deflated tyres. Mercedes even demonstrated this – the car was put through a slalom course with deflated tyres, with no marked change in the way it handled.

The old cliché of German cars being ‘built like a tank’ couldn’t be truer in this case. It takes a lot of muscle power to open the door, which as per a company official, weighs over 140kg. The thickened windows are made of five layers of glass that use polycarbonate to prevent them from cracking. The rest of the cabin though looks like just any other S-class, until you flip open the cubbyhole in the centre console. One of the cupholders has been sacrificed for an array of buttons. These buttons have functions like unlocking individual doors, activating the underbody fire extinguisher and you can also release fresh air inside the cabin in case the atmosphere outside becomes less than desirable.

In a presentation we were shown the taxing test these cars go through. The underbody of the car is set ablaze, there’s an explosion test that literally engulfs the car in flames, and finally, test cars are showered with as many as 500 0.44-grade bullets, from different ranges. Just to get the point across, a 0.44-grade bullet can go through eight doors of a regular car with hardly any change in its velocity by the time it digs a hole in the last one.

So why are we driving a four-tonne luxury tank through a slalom and around the Buddh International Circuit? Well, apart from the fact that Mercedes says the car isn’t difficult to drive, these left-hand-drive cars were flown in from Germany, and it would have been illegal to drive them on public roads.

“Get used to the car first and then go for it,” said the instructor as we lined up at the start of the slalom course. I paid heed to this advice and, after sampling the lighter-armoured M-class Guard and E-class Guard, it was the turn of the S-Guard to be put to the agility test. After weaving it around the cones, I was thoroughly impressed with the way the suspension and tyres dealt with the added mass. And it doesn’t feel very different from a standard car at low speeds either. Later, we drove it on the 5.1km long F1 track, and my immediate reaction at the first corner was, “I can’t see the apex” – to which the trainer promptly quipped, “That’s a small price to pay for bulletproof security”. The edges on the front windshield around the A-pillar are so thick that it creates a blind spot.

Like the beefed up tyres and suspension, such a absurdly heavy car also requires a fitting motor, so it’s not surprising that the Guard is an S 600. That of course means a 522bhp, 84.63kgm, 6.0-litre twin-turbo V12. It’s smooth and near silent on the inside and audible only at high revs, and the sound it makes when on full song is glorious. The brakes on this car, with their massive six-piston calipers and larger discs, work seamlessly, and you soon learn to judge braking distances too. You need to use the brakes with care and early, as the car is so heavy that it doesn’t decelerate when you lift off the throttle.

Overall, the car is easy to drive, but you have to be mindful of the weight, which you feel when transitioning quickly through corners. If you’re the VVIP being shot at, you’ll likely be in the back seat, but worry not, as Mercedes will take two of your chauffeurs to Germany to train them to properly handle this car.

In this rarefied world of armoured luxury cars, there is a surprising amount of choice, actually. BMW and Audi do offer armoured versions of their 7-series and A8, and Mercedes itself offers the M-Guard and E-Guard, which offer slightly less armour at a lower price. The S-Guard sits at the top with its VR9 protection level and a preposterously expensive price tag of Rs 8.9 crore (ex-showroom, Delhi). For some, no price is too high for their own protection, and when the safest vehicle short of a battle tank also happens to be one of the best luxury cars on the planet, the outlay will certainly be worth it.