The car will be get changes to the exterior and interior. 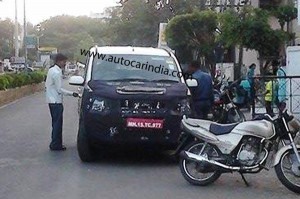 Mahindra is developing a face-lifted version of the Quanto with the company saying that it plans to launch the SUV sometime later this year. The automaker is also expected to reposition the car in its line-up. The prior version of the SUV looked more like a multi-purpose vehicle as it shared its looks with the Xylo. The SUV was unable to sell as per the automaker’s expectations with sales in FY 2014-15 (April-March), amounting to over 1,900 units as against the EcoSport which sold over 52,000 units.

However, Mahindra is all set to breathe some life into the facelifted SUV and establish a new identity by giving a distinctive bonnet scoop. The updated exterior also gets redesigned headlamps, grille and bumper. Pravin Shah, president and CEO of Mahindra’s automotive division said that the company has been developing the SUV and added that the update would roll out later this year.

Apart from the refreshed exterior, the updated SUV will also get alloy wheels on the higher variants. along with a new beige-themed dashboard and steering wheel amongst other amenities. The car will come with the existing 1.5-litre three-cylinder diesel motor making
98.6bhp and 24.4kgm of torque along with a five-speed manual gearbox.

Moreover, the automaker is also working towards launching two new compact SUVs such as the Mahindra S101 (internal codename) — an all-new compact SUV developed from the ground-up; and the Mahindra U-301 that has been built on the company’s next-gen ladder chassis.