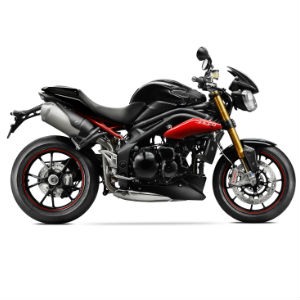 When it comes to Triumph motorcycles, serious enthusiasts lose their head trying to pick their favourites. Adventure bikes such as the Explorer and Tiger 800 XC can be much fancied by those who love to go on long rides on various terrains and in numerous seasons. These bikes are perfect for those looking for an adventurous bike ride in the mountains where paths are yet to be perfectly smooth. Bike lovers who prefer classic designs swear by the T100 and the Bonneville. Those interested in cruiser bikes prefer the Rocket or the Storm which have chrome and steel used in the body. Performance enthusiasts would surely appreciate the Daytonas which go from zero to a triple digit speed within seconds.

Triumph motorcycles are one of the most coveted among Indian bikers and they are hot property in the second hand bikes market.

However, all bike enthusiasts would agree that the Triumph Speed Triple 2014 is hard to ignore. Sections of the twin tubes are exposed and the bike has a well chiseled tank. The belly pan, frame of twin spar and the dual under seat exhausts make the bike look strong and robust. The head lights of the Triumph Speed Triple 2014 may look a bit like bugs and you might take some time to get used to them. However it is a bike hard to ignore and most bike enthusiasts would fancy a ride on it.

When you rev up the engine, a sweet sound is produced that would be appreciable to all bikers. When you look at the Triumph Speed Triple 2014, you would see that this street naked bike looks muscular and aggressive, much like what a street naked bike should look like. On mounting the bike, what is immediately noticeable is its forward stance which looks quite aggressive, a wide and flat handle bar, a back set of foot pegs meant for pillion riders. The bike’s tank comes in a blue colour which has a matte finish on it. It makes the tank look all the more muscular. The instrument and meters are a combination of digital and analogue. The lights that glow on at the time of gear changing can be programmed and there is a reminder for service interval. You also get a fuel gauge, lap timer and trip computer. The back wheel can be seen completely from the right side and this happens because of the aluminium swing arm which is one sided. What can be considered to be a let-down is the prominent and large saree guard on the left hand side. These street naked bikes can hardly be called friendly for families and hence most bikers would probably ride them alone, leaving the guard redundant and odd looking on the bike.

When you put the bike in ignition, rotate the clutch and press the starter, the motor shall start easily and settles into a bit of a high idle ride. On the main road, when a bit of throttle is added the motor produces a typical growl. This sound from the 3 cylinder engine of the bike is bound to sound pleasant to any motor biker. The sound can be heard in lower revs as well. When the revs keep increasing, at a higher pace, the sound may become addictive.

You can make quick changes through short speed gears at the time of accelerating. What is impressible is the performance of the bike on city roads in limiting speeds such as 60kmph to 70kmph.

The engine feels strong at all revs. If the revs are kept low, then the bike is quite practical to be ridden through city traffic and on a regular basis. You can down shift the gear and increase the speed to 100kmph and still feel the bike stable underneath you. The 4 piston Brembo calipers do a good job of knocking off speeds as you can slow down the bike without any glitch. The gears are smooth and precise and the neutral gear can be spotted easily.

Once you get acclimatized to the style of riding the bike, you can easily accelerate the bike through various gears. When put into the top most gear, cruising around the city at 60 kmph feels like a breeze and you can also clock 250kmph when racing the bike on a track. When you are riding the bike at 100kmph to 135kmph, it feels almost as if it is breezing through the roads. The Triumph Speed Triple 2014 certainly ticks all the boxes for a long distance bike and hence is ideal for those who love going on long rides. However, the position of riding the bike may be a little uncomfortable when the bike is ridden for a long distance.

The bike is powered by a 1050cc, liquid cooled, DOHC, 12 valve 3-cylinder in line engine which produces a peak power of 135PS at 9400rpm and a peak torque of 111Nm at 7750rpm. On paper, the Triumph Speed Triple 2014 may not sound as impressive as the other powerful bikes in this segment. However, in real time, the bike delivers excellent power. Post 3000rpm, there is a thrust of undiluted power and there is enough power in the engine for pulling wheelies till the 4th cog.

The growling sound of the Triumph Speed Triple 2014 is the accompaniment to the superb accelerating powers of the bike. The bike does growl and gurgle a little at the lower revolutions but when you open up the throttle, the twin exhausts give out a deafening roar. Any bike enthusiast would fall for the Speed Triple’s rich sound and peppy acceleration. The handling of the box is perfect. Moreover, the Triumph Speed Triple 2014 feels grounded when making turns and it feels steady and robust despite its 200 kilos plus frame. The directions of the handle bar can be changed confidently while Metzler tyres provide adequate grip. The excellent braking power is provided by the ABS enabled brakes.

The bike costs roughly Rs 10.4 lakhs and is the least expensive among litre category motorcycles. The stellar performance and practical usability on a regular basis can make it a coveted street naked by for most enthusiasts. However, the unsightly saree guard may irk a lot of bikers. You could also buy it at a lower price on the second hand bikes market.