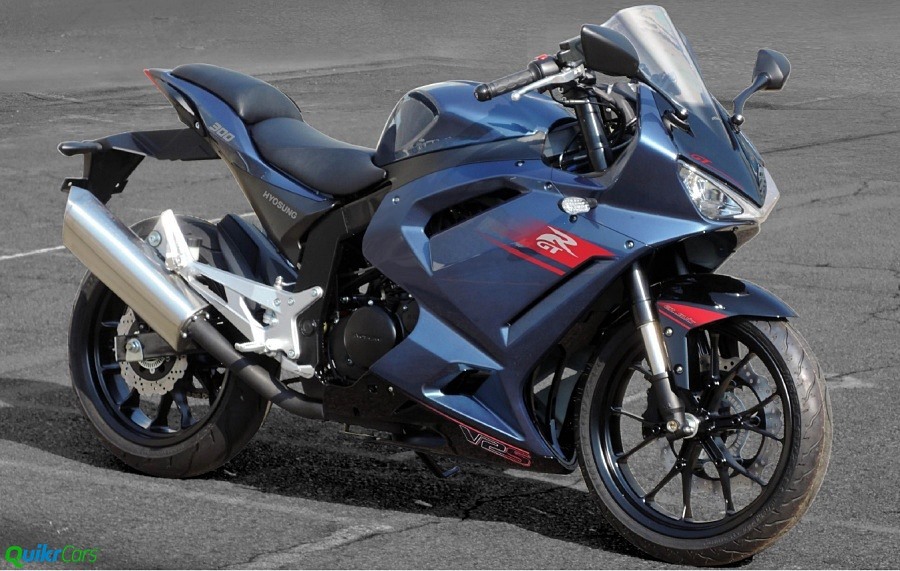 Both the Hyosung GT300R and the GV300 are completely new products with a new engine and completely new styling. Keeping up with the recent trend in the two-wheeler segment, Hyosung has upgraded their engine capacity with the new larger bored 275 cc engine from the earlier 250 cc. The new Hyosung GT300R is a fully faired sport bike which will be replacing the current GT250R. The styling of the new GT300R is modern, sharp and refreshing with dual headlight fairing, split seats and a sleek new exhaust. The new GT300R sport bike from Hyosung will be in direct competition with the likes of the KTM RC390, Kawasaki’s Ninja 300 and also the new Yamaha R3.

Unofficial reports suggest that the 275 cc 4-valve per cylinder V-twin engine manages a disappointing maximum power of 27.6 bhp at 10,500 rpm with maximum torque of 23.5 Nm coming in at 7,000 rpm. The engine too unfortunately still seems to be mated to a 5-speed transmission. The frame of the new GT300R seems to be borrowed from its predecessor GT250R. Suspension is taken care of by 41 mm upside down forks at the front which are complemented with the single monoshock unit at the rear. Braking features 300 mm single disc at the front along with 230 mm single disc at the rear end. The brakes are now equipped with ABS system as standard from Bosch. The wheels are 17” cast alloys with MRF tyres sized 110/70 at the front and 150/60 at the back. The GT300R features a 15 litre fuel tank and weighs in at 178 kg when dry.

The new cruiser, Hyosung Aquila GV300 also gets a completely new body work. The bike seems more muscular and bigger with a drastic reduction in chromed parts. Also, the engine, wheels and other underpinnings get the matte black power coating treatment. The new GV300 shares the same engine which has been re-tuned to match the riding style of a cruiser.

Though no details about the pricing of the new bikes have been officially released, we expect the GT300R and GV300 to be priced similar to the existing 250 models.