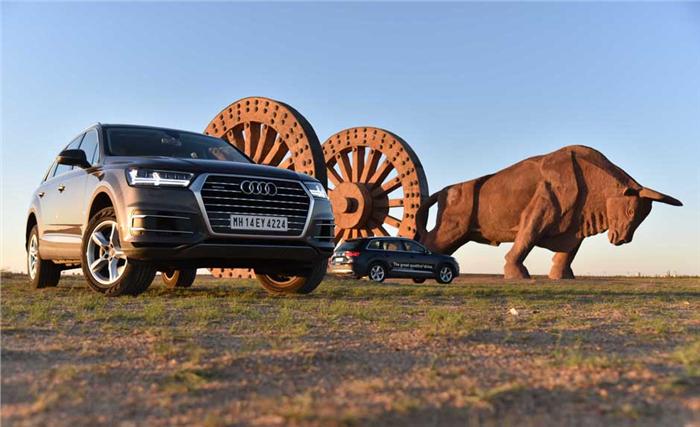 As per sources, the all new Audi Q7 will be launched in December this year. The new Q7 should be coming with the V6 3.0 litre TDI engine only according to industry experts. Local assembling should start in 2016.

The brand new Audi Q7 will be available at Indian showrooms from the 10th of December, 2015. The all new Q7 will be a whopping 300 kg lighter as compared to its previous model. The car feels a little smaller but comes with a stylish design comprising of a new single-piece grille and attractive creases. It will also have angular headlamps, new front and back bumpers and rectangular LED tail lamps. The car goes completely minimalist inside and offers a clutter free dashboard in addition to a free standing infotainment display. The car also gets a new central console complete with a multimedia controller and new gear lever.

The all new Q7 will draw its power from the V6 turbo diesel 3.0 litre engine that dishes out 268 BHP of power and 61 kgm of torque. This engine will be mated to a smooth eight-speed automatic gearbox complete with paddle shifters and Audi’s Quattro all wheel drive technology that is badged as the Q7 45TDI. The Q7 will have a single fully equipped trim when it is launched and will get several new features including the brand new infotainment system from Audi and four zone climate control. Added attractions include full leather seating with electric adjustments, panoramic sunroof, 19 speaker Bose audio system, 360 degree camera, electric folding third row, Matrix LED headlamps, Park Assist, Audi’s Virtual Cockpit fully digital instrument cluster, touch pad with handwriting recognition, air suspension and Drive Select.

The all new Q7 will be sold initially as a CBU import with local assembly of this premium SUV slated to commence in 2016 at the Aurangabad facility owned by Audi.