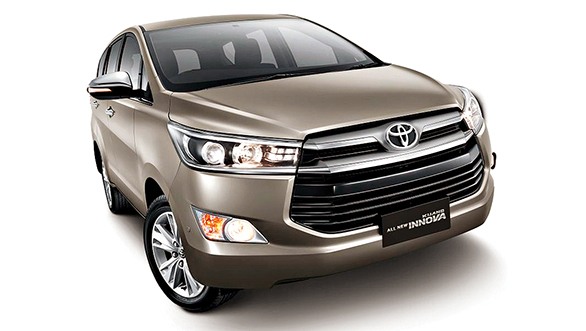 Toyota now has a brand new Innova to substitute one of its most successful cars in the country. The new Innova comes with several changes and new features. This should be a more premium proposition as compared to the vehicle that it replaces.

The new Innova car comes with a face that is sleek and stylish and the same effect is carried over to the tail. The sides remain the same while the top end variant should come with daytime running lamps, LED projector headlights and LED tail lamps. The car also comes with 17 inch wheels while the base and mid range model use 16 inch wheels. The interiors have been spruced up hugely and the car looks more spacious. Faux wood trims are used on the top variant while there is an 8 inch touch screen infotainment system, auto up and down for windows and front and rear climate control. The instrument cluster is brand new and comes with a TFT multi-information display. The middle row gets Captain seats along with flip-up tray tables. Keyless entry and go is also provided.

The ladder frame chassis is still used in the car along with similar double wishbones at the front along with a four link rear. The wheelbase has been increased by 150mm while the rear and front tracks have been increased to bolster handling. The model in Indonesia comes with a brand new engine which could be shipped to India as well. This 2.4 litre behemoth is more powerful and comes with 6 speed automatic and 5 speed manual transmission options. The engine should be dishing out 149 PS of power and 342 Nm of torque while automatic torque figures should stand at around 360 Nm. The car also has Power and Eco driving modes.

The car will come with dual front airbags and ABS as standard features in India as per sources. The top model should also be having curtain, seat and knee airbags in addition to hill assist and ESP. The new Innova should be launched by Toyota at the 2016 Auto Expo in India. The Indian version will have slightly different features as compared to its Indonesian counterpart. The new Innova will also come at a higher price owing to the more powerful engine and extra features. Prices should range between INR 10.6 and 15.9 lakh (ex-showroom Mumbai).