The Frankfurt Motor Show saw the launch of the facelifted Porsche 911 series. Now, a test mule was spotted on the streets belonging to the next series of 911 by the German sportscar maker, which has been codenamed as 992 series. 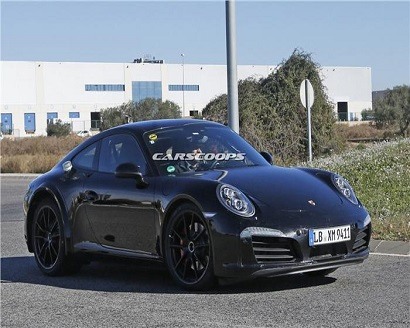 The test model of the new 911 that was spotted comes with wheel arch extensions at the back, indicating a cassis update or wider rear axle that could accommodate a larger powertrain. The next generation model shall be developed on the modified version of the car’s current MMB platform. It is expected to arrive towards the end of 2018, given Porsche’s seven year production cycle. The new vehicle shall be the first one in the range for receiving a hybrid engine with the maker likely to combine more than one electric motor to the flat-six engine giving the car an all wheel drive configuration. The petrol motor shall drive the rear axle and the electric motors that power the front wheels.

Porsche engineers, earlier in September had confirmed that they were working on packing a hybrid power train into the 911’s body that could explain the need for the wheel arch extensions on the test car.

Porsche is also considering an all-electric version of the 911 even though there is no guarantee that it would reach production. Basic models of 911 are slated to use the identical 3 litre twin turbo flat-six engine that debuted in the facelifted version of the 911 Carrera. However, prior to the entry of the next gen 911 in the market, Porsche is expected to introduce the latest 911 R at the Geneva Motor Show.