The official photos of the tenth generation of the Honda Civic Coupe were recently shown and Honda has unveiled the car at the Los Angeles Motor Show. The coupe is slated to be launched in March 2016 in the US.

It appears much toned down compared to the tough design that was shown earlier in the year at the New York Auto Show. 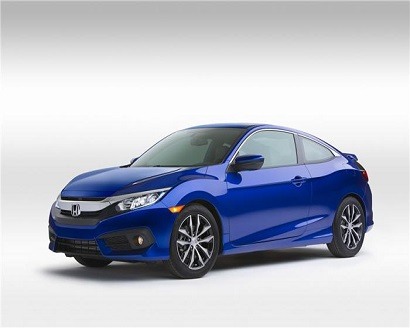 The triple door Honda Civic Coupe has a sporty looking chassis, top notch safety levels and space efficient interiors which have been improved by NVH levels because of acoustic glass windshields which coupe’s make use of.

The Honda Civic Coupe is being offered with two engines, a DOHC iVTEC 2 litres petrol engine that produces maximum power of 155 bhp as the base model while another 1.5 litres petrol engine that is turbocharged is also being offered. This engine produces a maximum power of 171 bhp and is the first turbocharged engine on the Honda Civic Coupe that powers higher levels of the trim. The 2 litres engine can be gotten with a six speed manual transmission or CVT, whereas the turbocharged engine has been hooked to CVT automated transmission. A Type R coupe is slated to be launched shortly with a regular six speed manual transmission.