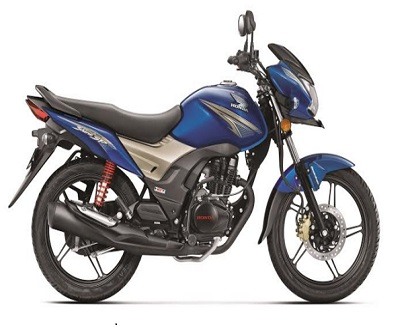 HMSI has widened the Shine motorcycle range with the CB Shine SP priced at INR 59, 900 onwards and going up to INR 64, 400 for the top variant as per ex showroom New Delhi figures.

Honda Motorcycle and Scooters India is already the second biggest maker of two wheelers in the country and holds market leadership with 46% share of the 110-125cc segment. An all new sporty variant of the executive CB Shine SP motorcycle has been launched and Honda expects to sell at least half of 1.75 lakh units of this market on a monthly basis.

This motorcycle has been designed to attract professionals and entrepreneurs who desired products more stylish and attractive from the company. The Shine will be competing with the Hero Glamour and Super Splendor in addition to the new Saluto from Yamaha’s stable. The new CB Shine SP range should be coming with a 5 speed gear box for boosting riding along with bringing down noise greatly. There is a digital analog meter console, Combi-Brake system, Honda Eco Technology and fuel efficiency figures are claimed to be 65 kmpl.

According to the Senior Vice President, Sales and Marketing, HMSI, Y S Guleria, the executive segment is at number three by way of numbers in India and takes up 11% of the entire bike market post the 100-110cc segment which comprises 41% of the same. The CB Shine SP comes with more features and better styling to attract new customers. Honda is hoping to revive sales figures as its motorcycle market share has gone down to 14.44% in India and sales have gone down between April and October of fiscal year 2016. An all new CB Hornet 160cc bike should also be launched by Honda in December. This will be a replacement for the CB Trigger.