Back in the days when the Indian auto market had a handful of players, Maruti Suzuki Esteem one of the best-selling sedan. Then came the Baleno, which Maruti’s reply to the Honda City. The Baleno was a flawless product, which apparently didn’t succeed in our market. Enthusiasts loved the Baleno and some swear by it even today. However, things didn’t go too well and globally Suzuki discontinued the Baleno brand as they didn’t build a successor. Now, Suzuki has named its new-generation premium hatchback as the Baleno. There is no inter-relation between the two cars except the name. This hatchback was unveiled at the Frankfurt Motor Show in September 2015 and India is the first auto market in the world to get it in under two months. We got an opportunity to drive this new premium hatchback that will be competing with the Hyundai Elite i20 and the Honda Jazz. How does the Baleno perform? Dig deeper as the mystery unfolds.

Now what is so special about the Baleno, is the new platform. Maruti Suzuki claims this new-generation platform is made of high tensile steel that makes it 100 kilograms lighter and 10% stronger. The hatchback has been designed on the ‘Liquid Flow’ theme that permeates throughout, articulated by curving lines and expressive surfaces. It has a low and wide silhouette that helps to underline a strong and bold look.

The front does have a glimpse of Swift in it, with a similar grille and somewhat resembling headlamps as well. Then there are the LEDs that make the difference. The elegant looking front grille does look stylish and it is the rear that looks most impressive especially due to the new design of the tail lamps that makes it look very European in styling. The chrome slat that runs across the rear— below the windshield— and the integrated rear spoiler adds a tinge of premium-ness to the styling. It will be made available in some subtle colours like grey, white and also in jazzy ones like a red and metallic blue.

The interiors of the Baleno are a tad more impressive than the exterior. Step in and get welcomed by the new-generation Suzuki interiors, with a new steering wheel, instrument cluster with a TFT screen and twin dials, a flowing centre console with an in-dash music system (touchscreen system offered on the top-of-the-line variant and the mid-level trim getting a 2-DIN music system). There is a CVT variant too (commonly referred as automatic) this doesn’t come with the top-of-the-line variant and misses out on some features. This is the first time, Maruti Suzuki is offering dual airbags and ABS as a standard feature across all the variants. The features on offer are keyless entry, push start and stop, touchscreen system with navigation, Apple CarPlay and reverse parking camera.

There are absolutely no complains about the space in the hatchback. Suzuki has designed this product with several inputs from Maruti as India is one of the major markets for this hatchback. There is a lot of room in the front row, and even the seats are comfortable with sufficient thigh and side support as well. The rear seats are decent in space but they miss out on good enough thigh support and there are no rear AC vents too, which is a common feature in this segment. There is another additional charging socket for the rear passengers, which is a handy feature to have.

The Baleno is about 100 kilograms lighter, so Maruti didn’t have to upgrade it to bigger engines. It gets the same engines like that on the Swift, and with a lighter body the performance is even better. The 1.2-litre petrol is a gem of an engine and this petrol motor churns about 83bhp of power and is the best petrol engine in its segment. The Elite i20 shares its petrol engine with the Grand i10, and the heavier body affects the performance. With the Baleno, it is the other way round. Press the accelerator and the engine won’t disappoint you. There is ample of power available at most of the engine rpms, but the best performance is extracted when you rev the engine a bit hard. Lug the petrol mill into the top cog and it will cruise with ease even at speeds of about 60km/hr. Driving in town or narrow streets isn’t a hassle either. There is a CVT (continuously variable transmission) option too on the petrol. It does drive without any stress in city and the response from the transmission is quick enough. If you need better performance from the CVT, drive it in the L mode where you will have better performance.

The Baleno’s second engine is the 1.3-litre diesel engine that churns 75bhp of power and has a 190Nm of torque. This powers the front wheels through a five-speed manual transmission. Now, the Baleno might have lesser power than the competition, but it doesn’t feel underpowered thanks to the reduced flab. Where the Baleno outpaces the competition is the delivery of power, which is very much like a petrol engine. This is an add-on benefit that this engine possess. We have done a short drive of the Baleno and hence we aren’t sure of how much mileage will the diesel or the petrol return. We will do a detailed review this premium hatchback very soon and share our review of it, including the mileage of the hatchback in petrol and diesel avatars.

The ride of the Baleno is pliant and is consistent at low and even high speeds. On bad roads, the shock absorbers do a fine job of filtering all the road shocks from reaching the occupants. The handling of the Baleno is a few notches above the Swift. The 100 kilogram diet means better handling and performance from the vehicle. The steering wheel is light and easy to drive in city and it weighs up well the moment the vehicle gathers speed. 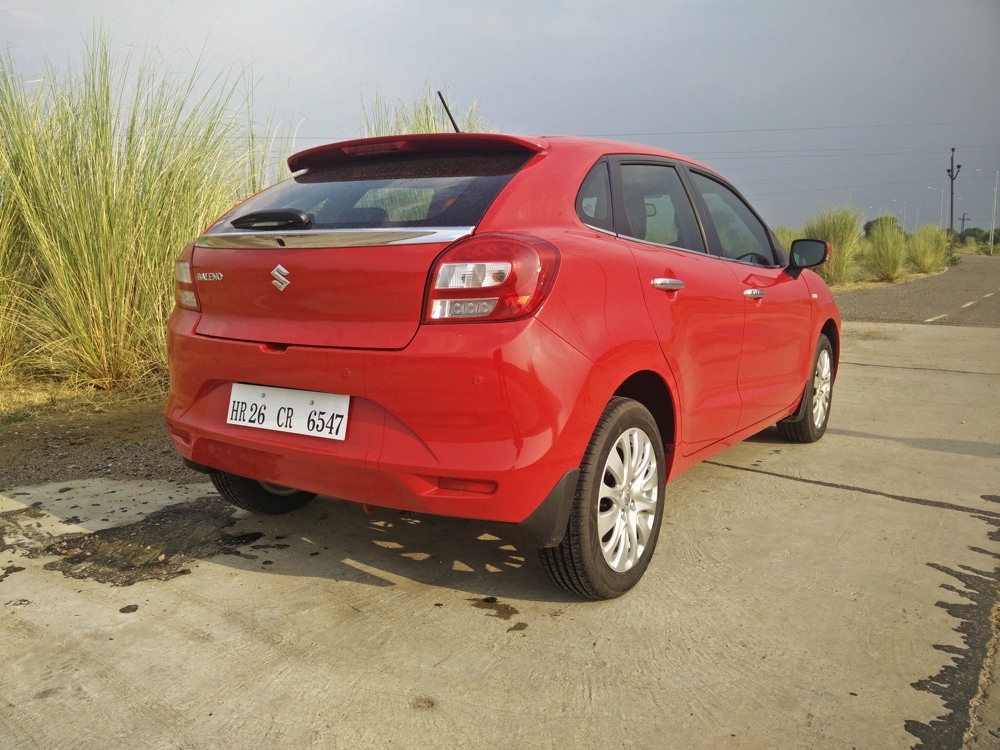 The Baleno’s pricing isn’t revealed still as a product Maruti Suzuki has ticked all the correct boxes for its new premium hatchback. Indicating it wants to make a strong presence in this segment. Hyundai is the strongest player with the Elite i20, but one cannot avoid and understate the Baleno as it has an equally good if not better package. The petrol version of the Baleno has an edge with better performance and of course Maruti’s badge value.