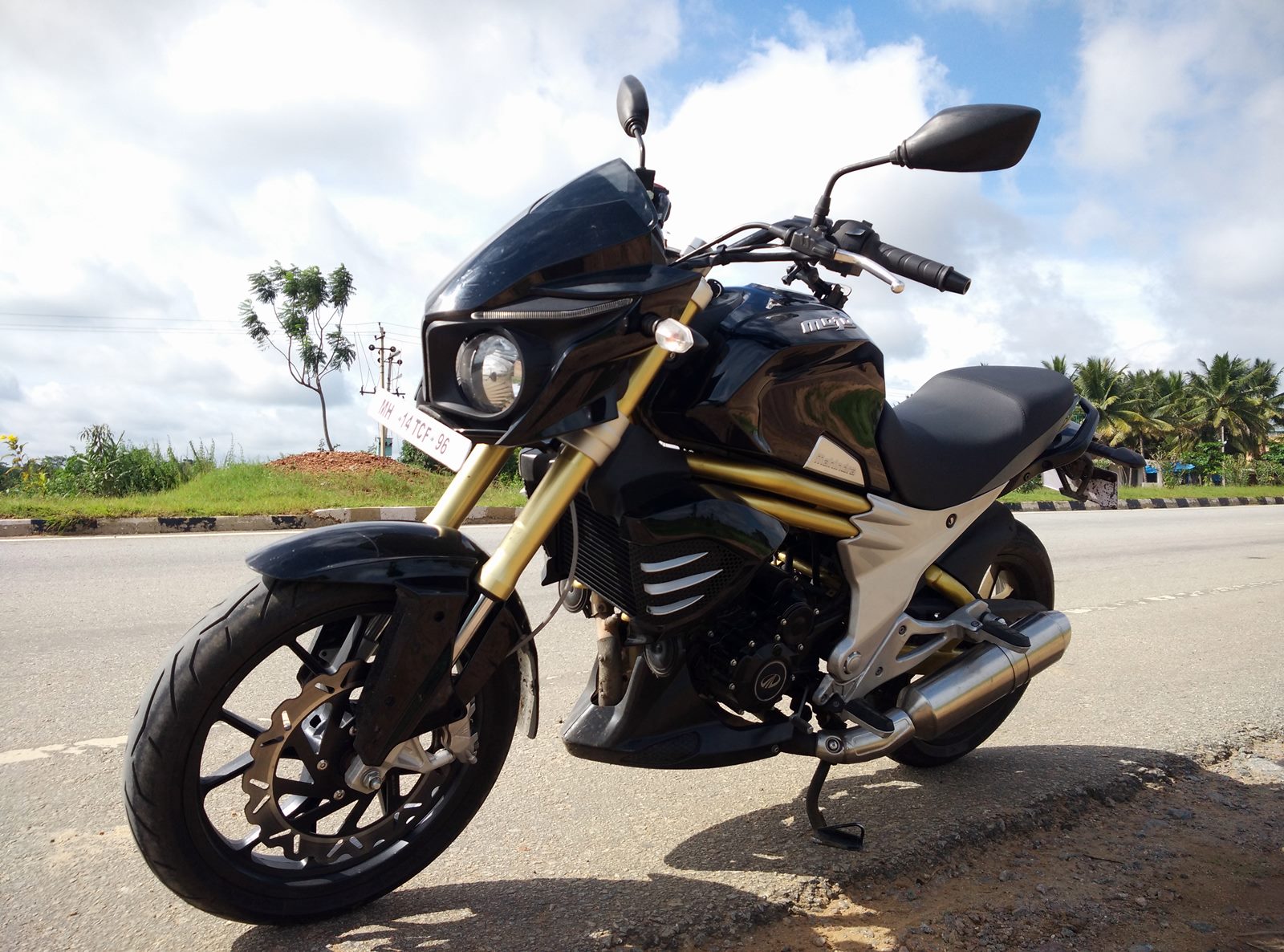 After a long wait the Mahindra Mojo will be officially launched on the 16th of October. The Mojo saw a long and slow incubation period which made bike enthusiasts literally think that the bike would never make it to the market. But, by the looks of it, it seems that it has been worth the wait. Mahindra took a bold step and decided to make the Mojo a sport tourer rather than an outright performance oriented naked. At a crucial time in the Indian motorcycle market, Mahindra have beaten the Royal Enfield’s Himalayan in the race to launch their ‘tourer’ Mojo to the masses.

We managed to get our hands on the Mahindra Mojo and took it for a spin to see what Mahindra have been cooking for almost half a decade. The initial impressions were very positive. Since the visual aesthetics of the bike is something completely new to what we are used to, it takes some time to let the design lines sink-in and appreciate its unique styling. But, with features such as the twin headlamps, golden USD forks, dual exhausts and more, the bike has a premium look overall. And, the stance of the bike looks balanced and apt for a sport tourer.

The first feeling when you swing your leg over the Mojo is of comfort. The seat height, the position of the foot-pegs along with the high and wide handle bars give a good sense of control and confidence with a relaxed and comfortable seating position. Turning on the ignition and firing up the engine, the bike pulls effortlessly through the gears due to the huge 30 Nm torque kicking in as low as 5,500 rpm. The Mahindra Mojo is very quick off the line taking less than 9 seconds for 0-100 kmph. With the engine churning a good 27 PS, we could achieve a top speed of 153 kmph but it felt that the bike could easily push further. Mahindra claim a top speed of 165 kmph. The engine feels very refined without any vibrations even at high rpm’s. The engine is mated to a 6-speed transmission with a tall 6th gear for effortless cruising around 120 kmph. The dual exhausts produce a good distinct mid-bass note which would not be annoying during long rides.

The handling of the bike is great on any terrain with the USD front forks and the monoshock unit at the rear having a travel of 143 mm. The bike has a slightly front biased weight distribution giving it good but slightly heavy front-end feel. Though the bike is not designed to take on corners with knees on the ground, it feels very stable and predictable. The alloys are shod with Pirelli Diablo Rosso II, 110/70-17 section at the front and 150/60-17 section at the rear which provide great grip and complement the suspension. The brakes are not sharp but are progressive with callipers by Jjuan with 320 mm discs at the front and 240 mm at the rear. Overall, the handling of the bike is fun even with the large rake-angle, long wheel-base and a kerb weight of 183 kg.

The build quality of the Mahindra Mojo is good for a product produced in India. Some of the major negatives over the top of our heads were the headlights and the instrument cluster. The head-lights could have done with two 55 watt units instead of the present 35 watt bulbs for better visibility during the night keeping ‘touring’ in mind. The instrument cluster seems over worked and could have been much cleaner and less cramped with a slightly larger digital display.

All in all the Mojo looks to be a great tourer. The Mahindra Mojo will be launched with an ex-showroom price tag of approximately INR 1,60,000. Booking began couple of weeks back and the first batch of Mojo customers are going to receive promotional goodies such as riding apparel and cash discounts.