Audi has launched its estate in India and it’s a high performance model.

The RS6 is the only estate car currently offered in India and it’s not just any estate it’s an estate capable of keeping up with the BMW M5s and Mercedes-AMG E63s with figures like a claimed 0-100kph time of 3.9 seconds and a top speed of 305kph. In a nutshell, its an estate unlike any India has ever seen or heard as well in this car’s case. 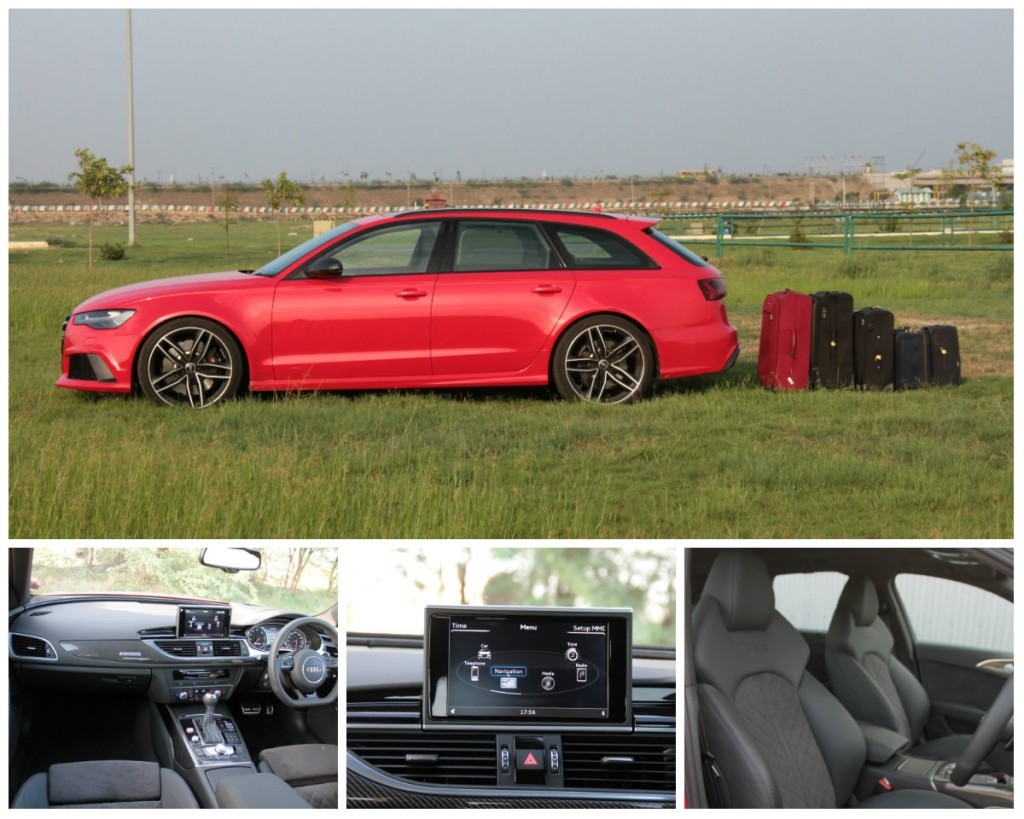 It doesn’t look like your average estate either. In essence, a high-performance version of the well- proportioned A6 estate available abroad, the car looks menacing and hot. Be it the fiery scarlet red paint of the test car or elements such as the large air intakes up front, exaggerated wheel arches and the optional 21-inch wheels, the estate is an attention magnet wherever it goes. And to think estates were considered borderline boring! Even the tail end looks all business, thanks to the carbon fibre diffuser and the pair of oversized exhausts.

The cabin is no less special. Chunky flat-bottomed steering wheel apart, there’s plenty of alcantara, brushed aluminium and carbon-fibre trimming on the inside to distinguish it from the more everyday versions. The familiar dash remains as user-friendly as ever with all controls positioned within easy reach. Up front there are sport seats as standard that look sexy and offer great support. However, the side bolstering cannot be adjusted. The rear seats are more standard in form, but offer enough comfort for two occupants; the middle passenger will have to contend with the high centre tunnel.

The estate is also practical as well. The powered tail-gate lifts to reveal a well-shaped, 565-litre luggage bay. It’s large enough to be useful house-moving missions. It’s also enough space for your dog to move around in. Should you need more space, the rear seats fold down flat to free up 1680-litre of luggage room. Then there is the mechanics. The estate is powered by the same engine that makes its way under the hood of the RS7. It’s a 4.0-litre twin-turbo, direct injection V8 petrol engine that makes a fanatical 553bhp and 71.3kgm of torque. The engine comes mated to an eight-speed torque converter gearbox and power is channelled via Audi’s Quattro all-wheel drive system. In typical driving, the front-to-rear power split is 40:60, but depending on the conditions as much as 70 percent of power can go to the front, or 85 percent can go to the rear. There’s torque vectoring too, for added precision.

In a straight line, the estate is just manic. There’s no launch control here, but the all-wheel drive system allows for ballistic controlled getaways. Thanks to the turbos, almost the entire rev range is the powerband. As a result, explosive performance is never too far. The super quick gearbox also deserves credit here. It shifts gears without any delay, be it in full automatic mode or when operated manually via the paddle shifters or gear lever. The exhaust also adds its share of drama to the proceedings. There’s an ever-present bassy rumble at low revs that builds up to a deep-throated growl at higher revs. At its loudest setting, the exhaust will also bark and pop on gearshifts.

Taking a corner, the car feels very poised. There’s little body roll and you can tell that the car has immense reserves of grip. The Quattro system means the last bit should hold true irrespective of the weather. However, for all its power and noise, the car just isn’t as good as a BMW M5. A part of this is down to the steering. Sure, it’s got ample weight when set to Dynamic but, like other units from the company, it tends to be numb to what is happening at the front wheel. The estate comes equipped with adjustable air suspension as standard, and the good thing is it balances out the opposing requirements for agility and comfort quite well. Yes, the ride is firm across all settings but the Comfort mode does do justice to its name — despite our test car running on wafer-thin 21-inch tyres. However, were we to spec the car, we’d stick with the standard 20-inch rims. Not only do they come with more absorbent higher profile tyres, they are also less prone to damage on our roads.

Given the unfavourable response to estates in India, the Audi RS6 Avant comes across as a curious addition to Audi’s line-up. However, think of the RS6 as a performance car that just happens to be an estate and you’ll see it in the right light. This is a blistering fast car for those who must have something different. The estate shape will not only help the RS6 standout at the odd supercar gathering, but also gives it a practicality you wouldn’t associate with a high-speed machine.