The Aspire is the American manufacturer’s first crack at a four-metre sedan market in India. Right from the start, the latest Ford has its work cut out. Up against well-entrenched competition like the Dzire, Amaze, Xcent and Zest the upcoming compact sedan will have to be really good to make an impression. The American carmaker, however, is quietly confident it’s come up with something that can accomplish this. Some of that confidence stems from the fact that the sedan is much better suited to Indian conditions than any of the manufacturer’s other models. It has been developed in the country.

Up front, the nose has clean, crisp lines. The Aston Martin-like look really does work well and the headlamps and heavily chromed grille further embellish the looks. Helping here are some sharp-looking cut lines on the bonnet and the fairly aggressive chin. In profile though, the car isn’t very well proportioned. For sub-four metre sedans, a balanced form and cabin roominess are generally at odds and seeing this car in profile, you’ll know which side Ford has erred to. The boot is stubby and you can’t miss that the 14-inch wheels appear a size too small. At the tail, there’s nothing remarkable about the simple, single-piece tail-lamps but the thick band of chrome on the boot lid does liven up things up a bit and makes the rear look wider than it actually is.

Inside, the steering wheel, gear knob and wing-shaped centre console, all have a familiar look and solid feel. Many of the new bits are designed from the same template as well. What also grabs your attention is the two-tone treatment of the dash. The black-and-beige sections go really well together but quality when talking fit and finish is just at par with the class and no more. Sure, bits like the knobs for the climate control system do look rich but then the quality on the door pads isn’t very impressive, the plastics on the lower half of the central console are just about average and the design of the tiny instrument cluster is a little bland too. That the tachometer and fuel gauge get equal-sized dials is perhaps a pointer that the car gives equal weightage to performance and fuel economy.

On the whole, though, the cabin is very practical. The generous 2491mm wheelbase means there’s plenty of space between the wheels, the boot holds an impressive 359 litres of luggage due to clever use of vertical space and the big doors allow easy access to the cabin. There are plenty of cubbyholes and spaces to store stuff in the cabin as well. The glovebox is of a good size, there are two bottle-holders in each front door pocket and the centre console has three cup-holders too; they make up for the lack of rear door pockets.  You have to make do with the front seat door pockets which come as standard. Those familiar with the manufacturer’s cars will also notice that the stalks behind the steering wheel are now the right way around – indicators on the right, wipers on the left.

The car has also been given a lot of clever touches. There’s a nice rubberised ledge for keeping odds and ends in front of the gear lever and Ford’s new MyKey system allows the driver to preset things like speed and volume limits for the chauffeur (or perhaps even your children!). There’s also MyFord Dock atop the centre console. It’s a brilliantly executed rubberised phone/device holder which works so well that you have no qualms placing your most valuable devices in its jaws. It’s a great feature for those who rely on their phones for GPS.

The car is also very comfortable, especially at the front with the front seats offering excellent thigh, lateral and back support. Top-spec cars get leather seats and their cushioning is fantastic. We did find the fabric seats on lower versions a touch too soft, especially at the lower back. While the driving position is a bit low slung and needs some adjustment, the seats do have a wide range of adjustment and the low dash means visibility for the driver is really good. At first glance the rear seats don’t look very promising but the back bench is more spacious than you think and one of the strengths of the car. Knee room is excellent, even with a tall passenger in the front as Ford has scooped out the seat backs for additional space, and there’s plenty of space for your feet under the front seats. In addition, thigh support is good, the backrest is nicely reclined and the overall cushioning especially on seats which have fabric trim, feel quite plush.

Sadly the car doesn’t feel as well built as its siblings the EcoSport and Fiesta. Ford has pared the car’s weight down in the interest of better fuel economy; the heaviest version weighs in at just 1,048kg, which seems to have affected that feeling of solidity.

The car will be available with a 1.5-litre diesel, a 1.2-litre petrol and a 1.5-litre petrol engine, the last one solely available with a dual-clutch automatic gearbox. While the engines are familiar and have found application in other models, the 1.5 diesel turned out to be the big surprise. Thanks to tweaks to the ECU and modifications to the fixed-geometry turbocharger, power is up to 98bhp. Given that the same engine on the more expensive Fiesta and EcoSport makes a lesser 90bhp, you can tell Ford thrown its model hierarchy out of the window.

Acceleration is strong in the diesel motor, even if you use just half-throttle, and the car pulls forward effortlessly when you demand a sudden burst of acceleration. It’s not got the initial response of Honda’s 1.5 unit but driveability is still very good. The turbo comes in nice and early at a low 1400rpm and there is ample power till about 4000rpm. It’s not a very free-revving engine but there is enough of a top-end to excite keen drivers. However, the motor does tend to get noisy when pulled hard past 3500rpm and the drone can get interfering. Otherwise at moderate revs this engine is pretty refined. In fact, thanks to superb insulation cabin noise is pretty hushed making the car one of the quietest compact sedans around. 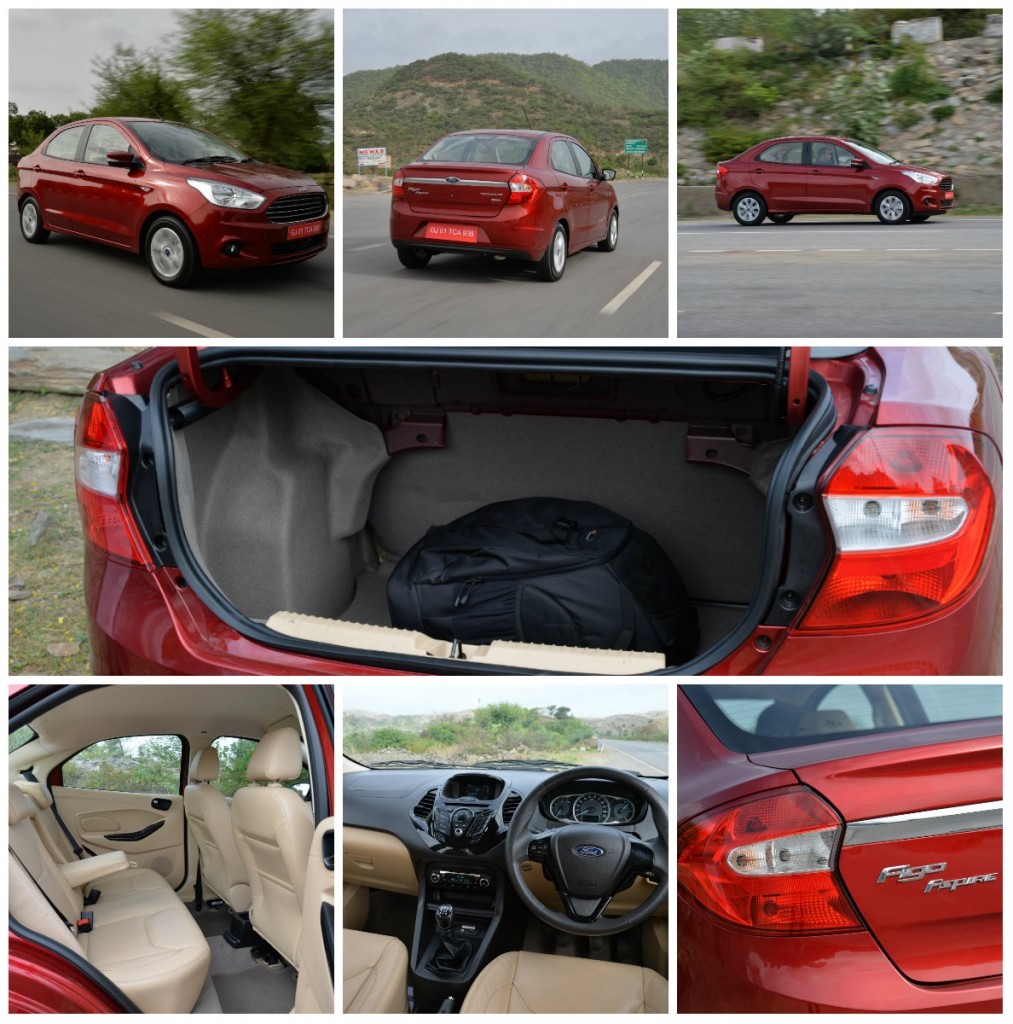 Like the diesel, the 1.2 petrol is much improved too. It now produces a more useful 87bhp, compared to the old Figo hatchback’s 70bhp and that’s something you feel immediately. Part- throttle responses are quicker and acceleration is better all through the powerband. Thing is this engine is more suited to the requirements of everyday driving than for all-out fun. The engine feels laboured in the mid-range at full load.  You’ll also feel the need for more power as you head out to more open roads where overtaking can require some prior planning. The 1.2 is clearly best suited for city running.

When it comes to ride and handling, comfort is clearly seems to be a focus area. The suspension is quite absorbent and bumps are ridden over so well that you stop paying attention to every pimple on the road. On really bad sections of road, the ride does get a bit bouncy, highlighting a slightly harder edge to the set-up. What makes ride quality even nicer is that the suspension works quite silently for the most part.

Unfortunately, there’s some bad news for driving enthusiasts. Yes, it does mildly enjoy being driven hard and responds better the more you load up the suspension. But, that effortless grip, flawless confidence and precise steering from the Fiesta is missing here. There’s a strange looseness in the steering around the straight ahead position and body roll is ever-present. The petrol version is the better of the two models in the corners with a touch more steering feel and correspondingly a greater feeling of connection. The brakes on both petrol and diesel models, however, inspire tremendous confidence; stopping power was impressive as well and that lends a lot to the overall driving experience.

Ford may have been late to the compact sedan segment but it’s used its time well. Sure, the Aspire may not be as special to drive as other but it does offer everything to help it appeal to a wide buyer base. Ford has clearly spent a lot of money to give buyers what they want, be it in terms of newer concerns as connectivity and safety or in traditional requirements of space, comfort and efficiency. Now all we need to wait for is the price.