All models will come with four-wheel-drive system as standard. The Coupé has been extensively re-engineered from its standard sibling. The two models share the same steel monocoque platform and wheelbase. However, the Coupé has track widths increased both at the front (3mm) and at the rear (60mm), over those of its standard sister. The new car gets four conventional doors and a large liftback-style tailgate. The V6 diesel in the 350d is not greatly illustrious in either performance or fuel economy, but it’s refined nearly throughout its rev range and, with a stout 63.18kgm of torque low down, is flexible as well. There’s plenty of punch for overtaking, although an official 0-100kph time of 7.0sec and 225kph top speed is nothing noteworthy.

The standard nine-speed automatic gearbox feels smoother and more intuitive than the older seven-speed unit used in the 400 Coupé; it provides quick, decisive shifts. The engine requires so few revs at 129kph that you can barely hear it over the constant rustle of wind around the sizeable mirror housings. It may tip the scales at a hefty 2185kg, but the 350d handles with great elegance when hurried along on winding back roads. There is moderate body roll, even in the firmest of the three settings offered by its usual front steel springs and optional rear air springs setup, as used by our test car. However, the overall agility is quite impressive for something so big. The four-wheel drive system provides decent grip which is enhanced by a torque vectoring function that lets you maintain good pace through corners. 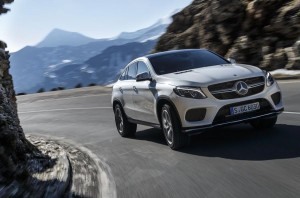 The ride, in the softest damper setting, is excellent both around town and out on the open road. The overall control of the suspension over high-frequency bumps at lower speeds is very impressive, as is the car’s ability to settle quickly on undulating sections of road. Road noise is also well suppressed though our impression is based on German roads so we can’t say what it’s going to be like here. The SUV gets standard steel spring suspension, although the manufacturer expect the majority of customers will choose the optional Airmatic air suspension, which uses air springs and new ADS Plus adaptive damping system.

Another notable feature is the Dynamic Select driving mode control system. It provides the driver with selectable driving modes; in the case of the 350d – Individual, Comfort, Sport and Slippery. Other models also get a Sport Plus mode that brings a double de-clutch function on the gearbox during downshifts. You step up higher into the Coupé than you do in the regular SUV, due to an additional 12mm of ride height because of its larger wheels. When you settle into the broad driver’s seat, you quickly discover one fundamental downside to the SUV’s styling – the rear visibility. This immediately makes it clear why the manufacturer has decided to provide its latest model with a rear camera as standard.

Cost considerations mean the interior is largely shared with the standard sibling. The familiar-looking dashboard is a relatively busy affair, with a free-standing monitor set high and varying controls adorning the centre section. The latest generation of Mercedes’ Comand infotainment system is mounted between the front seats along with the controls to alter the aforementioned driving modes. of cabin space all round. The low-set rear seats cater to three adult passengers, with adequate leg and head room for the outer seat occupants. However, the middle seat is compromised by a narrow seat cushion and transmission tunnel. Boot space is a claimed 650 litres, although the boot has an unusually high loading lip, making it fairly uncomfortable to lift heavy items over. The rear bumper extends so high, in fact, that it is used to house the opening mechanism for the automatic tailgate.

There is no ignoring the sheer presence of the Mercedes GLE Coupe on the road, which alone could become the SUV’s biggest selling point in the market.