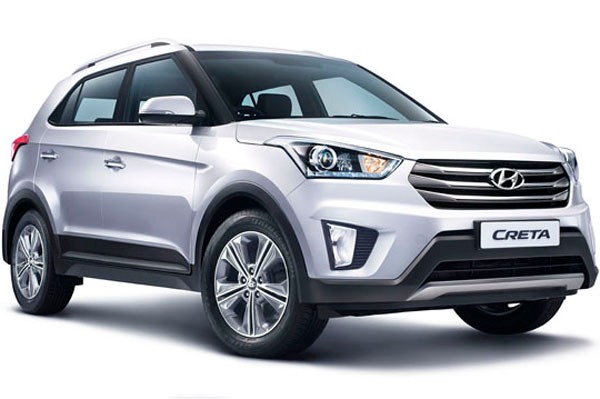 Unlike other compact SUVs like the Ford EcoSport, the Hyundai looks and feels half a size bigger. It gets a long bonnet with an upright SUV stance. The prominent front bumper and upright grille add to the SUV’s looks of being a class larger. It’s attractively proportioned around the back too with simple but attractive tail-lights adding a touch of elegance. The SUV has also been styled to have a wider base to give it a more planted look.

Inside, the dashboard is attractive and not over-styled. The centre console is integrated neatly into the surface of the dash and to make the insides more attractive, the company has used a lot of beige along with brushed silver accents. On the top spec SX (O) trim, the dash is dominated by a centrally mounted seven-inch touchscreen while lower down there are the climate control knobs similar to those on the i20. The model gets push-button start, telephony and audio controls on the steering wheel, along with ESP, ABS and six airbags. In terms of quality, the SUV scores highly and is sure to be a segment benchmark.

The long 2590mm wheelbase of the new SUV translates to good room inside and legroom and headroom are quite impressive as well. The front seats offer good support while the rear seat passengers will love the space and comfort on offer, with an almost flat floor aiding a middle seat occupant. The seats are well contoured but could do with more thigh support in the rear. The other slight issue is that though you aren’t actually seated that low down, the high window line gives you that impression, and your view from the back seats is more akin to what you’ll find in a sedan than an SUV.

In the feature department, a strong point on all Hyundais, the top-spec SX(O) is loaded with equipment that includes automatic headlamps, push-button start, automatic climate control, Bluetooth connectivity, a rear-view camera, navigation system, rear air-con vents, steering-mounted audio and telephony controls and leather upholstery. The automatic version however is likely to only be available on the lower SX variant therfore missing out on features like leather upholstery, smaller 16-inch rims instead of the 17-inchers on the top trim and only two airbags instead of the full six.

The SUV’s engines are shared with the Verna – 1.4 and 1.6 diesels and a 1.6 petrol. A six-speed manual gearbox is offered as standard, though the bigger diesel gets the option of a six-speed auto as well. We got to drive the 1.6-litre diesel with both manual and automatic transmissions and came away quite impressed. On the brief drive around the manufacturer’s test track, the 1.6-litre diesel engine felt smooth, silent and very punchy over its band of operation. Whereas, its high power output of 126bhp is important, even more important is the healthy torque figure of 26.5kgm which is required to manage the SUV’s weight. There is some initial turbo lag and the engine hits its best only after 1,900rpm. However, off-boost power isn’t too bad, and unless you really want to make quick progress, it won’t warrant many downshifts. The gearshifts themselves on the six-speed transmission are quite positive with precise and short throws. The motor’s punchy mid-range will help the SUV make serious progress on the highway in terms of overtaking and cruising. The SUV also comes with a six-speed automatic gearbox, a segment first. In the normal D mode, the gearbox shifts up much earlier, so progress is relaxed but adequate. The torque converter masks the engine’s intial turbo lag, allowing for a much more linear power delivery thus making this SUV quite easy to drive. The gearshift are smooth and remind you that refinement and comfort have been given top priority over ultimate performance. This is evident in the way the gearbox is slow to downshift in manual mode. It does help that you can shift gears manually via the gear lever when you need that sudden acceleration for overtaking.

On first and brief impression, the SUV felt quite planted especially at high speeds. There’s some roll around corners because of the SUV’s soft suspension, but it felt in control and quite predictable. Thanks to decent wheel travel, we expect the SUV to offer good ride quality especially at low speeds, but a test track can’t simulate the real roads so we can’t be definitive. What’s also nice is that save for some tyre noise, the cabin is well insulated from the happenings outside and combined with the powerful and refined diesel engine, the SUV will be a great cruiser.

Buyers looking for a compact SUV will be pleased to know that the Creta is well built, comfortable inside and very well equipped. It felt reasonably composed and easy to drive during the short test and what helps it further is that the 1.6-litre diesel engine is one of the best around. So, as an overall package, the Hyundai Creta works really well, especially with an automatic gearbox on offer with the diesel motor. Set to be launched in July this year at an estimated price of Rs 8-12 lakh, the SUV should be a good buy in the category, though we won’t say its our final answer, after all we haven’t tested it on the road yet.