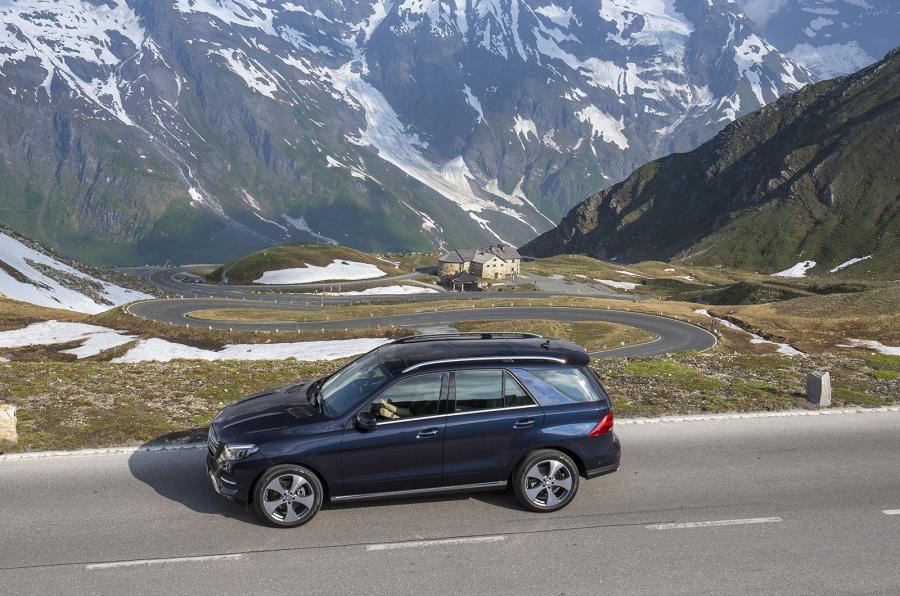 The GLE’s basic shape remains unaltered from the older model as do the underpinnings, but the nose and tail are a bit reworked. The front gets a new double-slatted grille with the three-pointed star at the centre, the new bonnet gets two power domes and the headlights are slightly altered and carry the familiar LED brow. The front fenders are more sculpted, but other than that the side view is unchanged and still wears the trademark, raked C-pillar that has been a part of the car since 1997. The rear gets a bit of an update with tail-lights that look more contemporary with the LED treatment. Redesigned tail pipes round off the exterior changes.

These styling updates are now in line with the latest Mercedes family look developed by chief designer Gordon Wagener and his design team. The new design language makes the styling of the new SUV similar to its smaller GLC and GLA siblings.

On the inside too there’s an improvement, the air vents get an upmarket ring of chrome whilst the audio system has flatter buttons, which feel more tactile to operate. The simplified centre console is dominated by a seven-inch floating screen and lacks the clutter of the older model. There are lots of elements from the company’s newer models like the infotainment system interface, which is similar to the latest C-class and the COMAND controller which now comes with a touchpad. There’s an additional knob for the dynamic select modes, which is likely to be standard on GLE 350 for the Indian market. The three-spoke steering wheel looks far more sportier than the four-spoke design of the previous SUV.

Cabin space is identical to the predecessor which means high level of comfort. The high-set front seats are very accommodating and give you a great outside view whilst the wide rear seats, with a relatively flat floor accommodates three passengers in reasonable comfort. The boot is again quite generous and the folding rear seats add to its versatility. The SUV is a strict five-seater with no seven-seat option.

The new SUV has been launched internationally with a wide range of engines which includes, for the first time, the 500e — a plug-in hybrid which mates a 3-litre turbo V6 petrol to an electric motor. The combined powertrain develops a hefty 435bhp, but you can drive in the non-polluting, pure-electric mode for 30km. A short drive revealed that the GLE 500e, like most hybrids, is quick of the line, refined and misleadingly fast. The electric and petrol motors are well synched but you can feel the V6 engine cut in and out. Sadly, this is the least likely model to come to India.

It’s the base 250d 4Matic (with all-wheel-drive) that will form the bulk of sales in India. This, two-litre motor that develops 204bhp and 51kgm of torque is the same engine from the ML 250 CDI. The big change however is the introduction of an all-new 9-speed automatic. This new transmission is a conventional torque converter and will be common to all future cars based on the company’s MRA platform.

The twin-turbo version of the 2-litre diesel is not the quietest of engines around and nowhere near as silkily hushed as the V6 diesel in the E350d. However, it’s refined enough and it’s only at high revs that you can tell there’s a diesel under the hood. During regular cruising, the engine can barely be heard and more audible in fact was a bit of wind noise rushing about the A-pillar.  The 9-speed gearbox with its ridiculously tall 9th gear made for effortless cruising. In fact, the last three ratios of this transmission are all overdrive to meet ever-tightening CO2 and emission targets.

The good thing is that this gearbox is pretty quick to react and will leap from 9th to 4th gear with a sharp prod of the right pedal, even with the Dynamic Select Control set on ‘Comfort’ — the most relaxed mode. Rotate the selector to the most extreme or enthusiastic ‘Sport +’ setting and the big GLE takes on a sense of urgency. Most impressive is how sportily the gearbox behaves downshifting on its own quite readily and holding on to revs before upshifting. It virtually like driving in manual and you really don’t need to mediate by pulling on the paddle shifters.

The strength of this engine is its strong surge of boost, which gives it a very effective low-end punch and a strong mid-range. However, for an SUV weighing over 2 tonnes it is modestly powered and it won’t exactly get your pulse racing. The handling is in the same vein too and on challenging roads, you could feel a fair bit of body roll. Though there is good grip from the 255/55 tyres, the SUV isn’t particularly agile and doesn’t like to dart into corners. The electro-mechanical steering isn’t very sharp or responsive either, but has lots of feel and weighs up with a nice consistency which gives the driver a lot of confidence, especially at high speeds. Straight-line stability is superb and the ability to cruise all-day long without demanding too much from the driver is one of the SUV’s strengths. Ride quality is a big plus too. Our test car was fitted with the optional AirMatic suspension – which may never come to India – capable of tackling most surfaces. Of course on German roads, it’s hard to judge the true ride quality from an Indian perspective, but the generous amount of wheel travel indicates that the SUV, like its predecessor will be quite adept at swallowing potholes.

The higher spec 350d will be the better equipped of the two with items like a panoramic sunroof, Dynamic Select Control and the Airmatic suspension as standard when the company brings the SUV to India. There is an off-road package with a low ratio for the transmission, which transforms the SUV into a mountain goat. Any doubts of its off-road capabilities were quickly dispelled in a ten-minute demo around a seriously challenging track which saw the GLE slithering up and down near vertical slopes like a mountain goat. However, this package will not come to India where the SUV is likely to only see tarmac.

In terms of style, the upright GLE isn’t really a head-turner and it won’t tempt enthusiastic drivers either. But for the average SUV owner, it ticks all the right boxes. It’s spacious, easy to drive and is of top-notch quality. It has more equipment and the 9-speed gearbox makes it a more compelling buy.