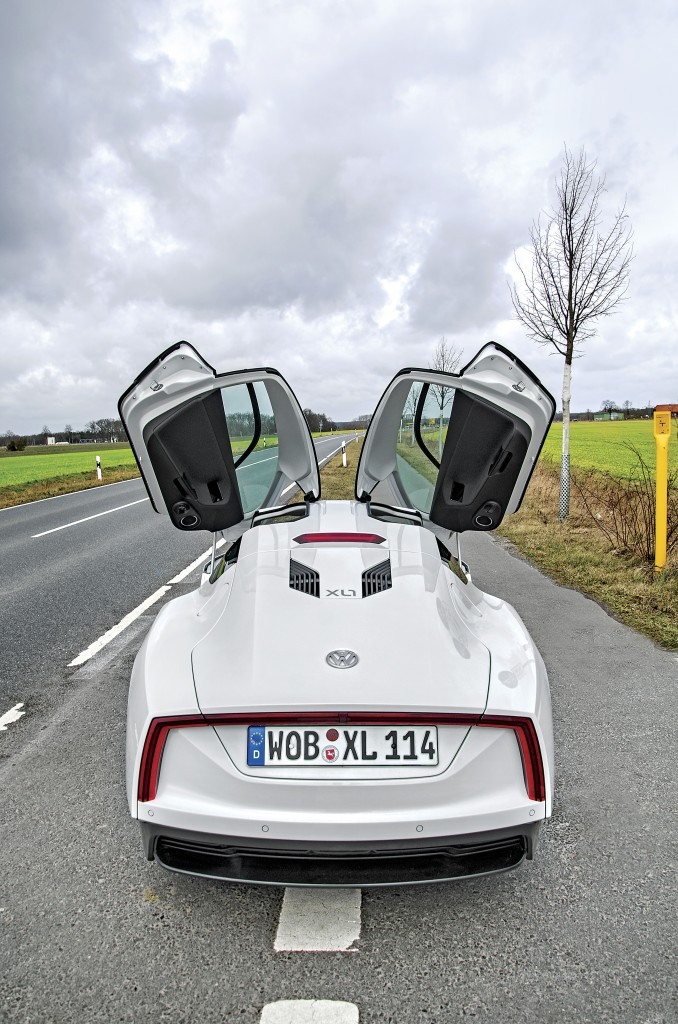 ve in the world’s most fuel efficient car.

100 kilometres per litre. No other road-legal car can take you that distance or so cheaply on a litre of fuel; which is why VW’s super-streamlined XL1 is proudly tagged the ‘1-litre car.’ We all know the ‘1-lakh car’ – the Nano – a global benchmark for frugal engineering, but the XL1 – which costs around Rs 74 lakh (without customs duty) – has a different agenda. For a company that produces something as over the top as the Veyron, the VW represents the other extreme. It’s the company’s, or more specifically, Ferdinand Piech’s way of showing the world that it can do Green better than anyone else. The car’s sole purpose is to burn as little fuel as possible and deliver a carbon footprint the size of an ant.

Because it’s a diesel hybrid, it’s cheaper to run than any bike, including the Hero Splendor iSmart which boasts a 100kpl-plus but sips pricier petrol. But before you get too excited about the car’s running costs, which are almost free when compared to an Alto, there are a few things to consider. First, you would have to drive around 5,00,000km to recover the price difference and, even if you can afford to get one, around about Rs 1.5 crore with full customs duty paid, there’s the small matter of finding one. 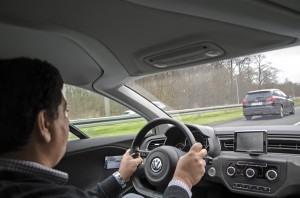 The german automaker made only 250 units, and they are all gone into the hands of some very rich and green owners. So, what’s the point then? It’s true the car is old news (being that it was launched in 2013), but it’s still very much the future of motoring, which is why we are here at the company’s home in Wolfsburg to get behind the wheel of one.

In the sprawling parking lot used by thousands of Wolfsburg’s employees, it’s easy to miss the tiny car, which is lower than a Lamborghini, narrower than a Nano (to reduce frontal area) and shorter than a Polo. But once you approach it, the space capsule-like shape has a visual production that can rival any supercar.

Every part of the car’s exterior has been honed to cheat the wind. It’s a classic teardrop shape with the body tapering at the rear. The rear wheels are enclosed to make the car as slippery as possible through air resulting in it having a drag coefficient of just 0.189.

But it’s not just the aerodynamic shape that contributes to the car’s astounding fuel efficiency. Weight, or rather, the lack of it, perhaps plays an even bigger role. The ultra-lightweight carbonfibre monocoque and aluminium bits keep it down to a very remarkable 795kg. I say very remarkable because that includes a 60kg lithium-ion battery pack, air-conditioning and bulky crash structures to ensure a good Euro NCAP rating.

Everything about the car is pint-sized to diminish drag and weight. Right from the scrawny 115/80 tyres up front and 145/ 55 at the rear to the tiny cameras that replace the rear mirrors. Even the fuel tank is limited to just 10 litres.

Slipping into the car is an event. The forward-hinged gullwing doors open with drama, 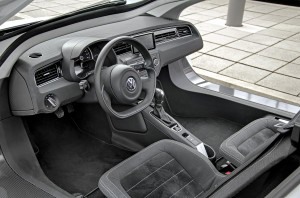 stepping over the fat sill to access the cabin is quite an obstacle, and once you drop down into the slim driver’s seat, you realise you’re only inches above the tarmac.

The car is an outright two-seater, but the clever bit is the spread out seating which lets the driver sit slightly ahead of the passenger. This is to allow a vital bit of extra shoulder room in such a narrow cabin. In contrast to the exterior, the dashboard is very simple. It’s a simple design with lots of familiar VW switchgear from cars as basic as the Polo.

The primary power source for the car is our Polo’s 1.6 TDI engine cut in half and placed in a mid-engine layout behind the cabin. This 830cc two-cylinder diesel, which produces 47bhp, works in succession with a 27bhp electric motor. The total power output of 74bhp in a car so light results in a claimed 0-100kph time of 12.7 seconds.

Fully charged and ready to go, the car starts off silently on pure electric power. You can drive this way for around 40km, after which the diesel engine picks up. If there is anything low-tech about the car apart from the mechanical window winders, it’s the way the engine sounds. It’s got a very elementary thrum, something like a cross between a tractor and an autorickshaw. In fact, there’s a fair bit of mechanical noise seeping into the cabin. Clearly, there isn’t much sound-deadening material, not because it’s too expensive, but too weighty for a car where every gram counts. The brake pads gripping the ceramic discs give off a scraping sound, the suspension sounds clunky, there’s a fair bit of tyre noise and the odd thud from the transmission can be heard as the clutch engages and releases.

For a car with unusual proportions and a titch of a powerplant, the XL1 is surprisingly fun to 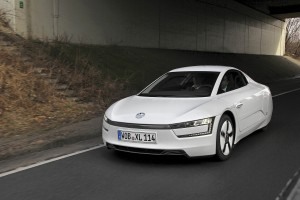 drive. On just electric power, performance is modest and just about enough to keep up with the fairly fast-moving traffic on the rural roads. Use the diesel and electric motor in tandem, and you can get up to some serious speeds. There’s a nice shove in the back, especially between 50- and 100kph and it’s surprisingly proficient on the autobahn too. The fact that you’re just inches away from the ground makes you feel like you’re going faster than you really are. The seven-speed DSG gearbox works faultlessly too and makes the most of both power units. It’s slowing the car down that is a bit unsettling because of the lack of a brake booster. Rearward visibility is also an issue and you have to rely on tiny screens in the door panels, which act as side mirrors.

The car is an astonishingly ingenious handler and actually fun to drive. Low slung and with a 5kWh battery pack placed at floor level, it has a centre of gravity that makes a usual hatch feel like a double-decker bus. There’s very little roll and grip is good too, despite the puny tyres and narrow track.

The car’s steering isn’t power-assisted, but with very little weight over the front wheels, it’s not too heavy and is accurate as well. 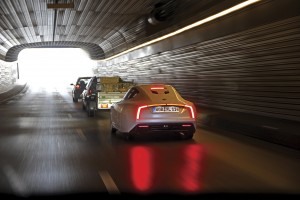 A lot of the tech in the car is expected to find its way into conventional Volkswagen cars. Now don’t expect your next Polo to drip with carbonfibre or come with enclosed wheels, of course, but it will be more fuel-efficient for sure.