Is the made in India Evoque any good? The Evoque may draw interest wherever it goes, but it’s been in the news for a different, albeit welcome reason. Land Rover has just started assembling the SUV in India and that has brought down the price of the five-door SUV by around Rs 6.2 – 8.8 lakh depending the variant you opt for. To add further value, the company has made a few previously cost options now part of standard equipment. Satellite navigation and parking sensors are now standard across the range while the top Prestige model sees the inclusion of rear entertainment screens and surround camera. Priced between Rs 48.73 – Rs 56.21 lakh (ex-showroom, Mumbai), the SUV is still not the cheapest of luxury SUVs in this size, but the price is a lot more palatable now. The SUV’s cabin is more spacious than you’d expect and is delightfully appointed as well. There’s a feel of affluence to everything in sight and the seats are comfortable too. If there’s something to complain about, it’s that the small-ish windows don’t offer that brand typical -commanding view out. Oh, we also wish Range Rover had updated the infotainment system since it looks a bit outdated in today’s world.

As before, the SUV comes powered by a 188bhp, 2.2-litre diesel engine. However, since last year, the SUV has featured a ZF nine-speed automatic gearbox in place of the previous six-speed unit. The move to a nine-speed gearbox was provoked by the quest for lower emissions and better efficiency — both being factors which have a bearing on rate of tax in some countries.

Around the bends, in the rough stuff and out on the highway, the nine-speed SUV feels just as the older version did. That is to say it is tight in body movements, as capable as any Range Rover should be and refined and long legged for extended-distance touring. Ride quality in general is good too with the tyres and suspension soaking up most of what our roads have to offer. 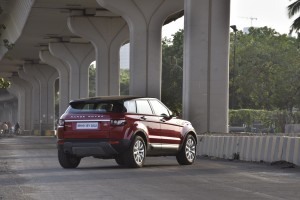 However, the in-town driving experience could be better. The gearbox is programmed to upshift as you lift off the throttle. Because of this, in slow-moving traffic the gearbox never settles on a ratio for long. As a result of the constant changing between the gears, power delivery is not for the most part smooth.

At lower speeds, gearshifts aren’t as unnoticeable as ZF’s own eight-speed unit. The way to work around this is to operate the paddles in manual mode or have the gearbox run in S, which limits needless upshifts. However, once on the move at faster speeds, the gearbox gets into its rhythm. Drive with a light enough foot and the electronics will have the gearbox shift to ninth at about 95kph. Press down and the gearbox will go down as many as five ratios, with no delay to get the car into the heart of the engine’s powerband. The engine delivers power in a nice, linear manner and manages to sound fairly refined even at its redline. Still, don’t expect the nine-speed model to outdo the older one by a great margin — performance figures are pretty similar.

The Evoque, when compared to the other luxury SUVs, is a model you’d love to be seen in. It’s 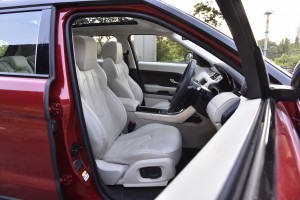 simply got a glamour quotient few other SUVs can match. But there’s so much more to it than just its striking shape. It delivers the full brand experience complete with the luxurious cabin, good all-round comfort and proven off-road ability. That it now costs less than before has just made it all the more enticing. As is, the sexy Evoque remains the SUV of choice for the style conscious — the slightly indecisive gearbox aside.