Which bike is better 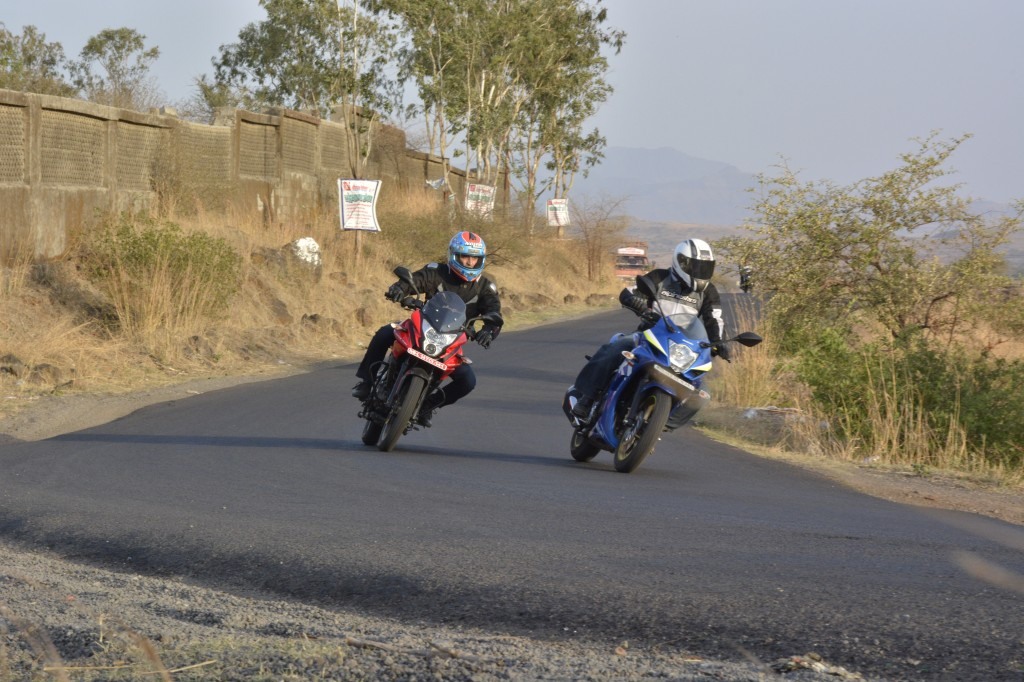 The bikes are two of the latest models from Bajaj and Suzuki. The motorcycles are equipped with modern technology, and are designed keeping the necessities of different riders in mind. Bajaj has built the AS 150 to take on or at-least fit the profile of a dual-role bike — one as a traveler within the city, and the other to go on adventures over the weekend.

Under its skin, Gixxer SF is essentially the very capable Gixxer. The bike is as adept as the older model, but now has the added benefit of a fully faired design. The Japanese bikemaker recently announced their Gixxer SF Cup, a one-make series to take place soon at two of India’s top race tracks, the Irungattukottai Race Track outside Chennai and the Kari Motor Speedway in Coimbatore, clearly stating the brand’s sporty intent for its Gixxer SF.

Here is a look at how the two motorcycles perform. 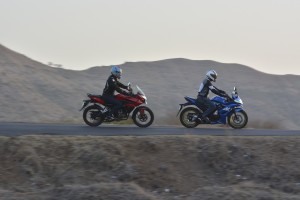 The AS 150 and SF feel just a bit different from each other once you are astride. The Adventure Sport has an upright, truly comfortable seating position. You sit upright with legs extending a bit towards the back and arms wide apart with almost no weight transferred to the wrists, making the bike good enough for daily use. On the SF, you sit with arms stretched out just a bit more and legs extending backwards a bit. The bike feels good to ride within the city.

However, riding dynamics of the two bikes are different. The AS 150 loves following a straight line, and is an able highway touring machine. The seat though plush and wide enough, can get slightly uncomfortable when cruising longer distances due to its squared edges. The bike is a decent handling bike around corners but lacks a confident feel as with the Gixxer SF.

The Suzuki will turn into the corner eagerly and you can really bank on its wide, MRF radial tyres and well-sorted suspension to make the most out of any winding road. Not only does it outdo the AS 150 on this front but it also virtually puts to shame every other motorcycle in its category. The SF is a bit of a benchmark bike in its class.

The SF shoots off with a well-tuned, low and mid-range power output, but the power tapers off rather quickly once you reach the far end of the rev range. The bike is good for highway runs and will cruise nicely while seating you in a comfortable, yet slightly sporty riding position. We achieved 60kph from a halt in 5.4 seconds on the Suzuki. The AS 150 in this respect has a better high-end power delivery and even feels a bit faster. The SF wants to be ridden hard every time. The AS 150 has a calmer, more relaxed operation and yet we achieved the 60kph mark in 5.1 seconds, which speaks volumes of its refinement levels. 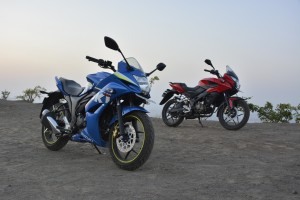 At cruising speeds of about 100kph, both motorcycles feel smooth and equally eager to rev on. Here the Bajaj feels as though it has a bit more power to play with, but ultimately both motorcycles can achieve speeds post 115kph going hard on the throttle.

Bringing all that power to halt on both the bikes are the potent Bybre braking systems. The Pulsar uses a single, 240mm petal disc up front, along with its 130mm drum brake at rear. This brings the bike to halt from 60kph in 17.56 meters only, without losing its composure. The Suzuki also makes use of a single Bybre made disc brake upfront but has a larger 266mm diameter. The brakes on the SF offer good initial bite and excellent feedback at the brake lever. We managed to bring the Gixxer SF to halt from 60kph in 15.24 seconds, credit for this also goes to its fatter radial rear tyre, which provides stability under hard braking.

Ride quality on the AS 150 feels plush and absorbs bumps with no issue. The Suzuki though is a well-sprung motorcycle equipped with fat 41mm front forks and a monoshock at rear that absorb broken roads well and remains stable over largely any kind of bump or undulation. Constant feedback is provided from the light steering unit upfront. The Gixxer SF is equipped with a steel tubular frame that holds the engine as a stressed member.

All is faired, in full or quart

The quarter fairing on the AS 150 is a neatly styled unit that extends back sleekly into a tall, 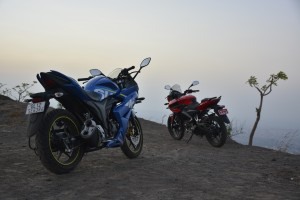 Now, the SF’s full fairing was designed in the same wind tunnel where the Hayabusa’s cocoon was desgined. The bike’s headlight, which is directly connected to the battery, emits a bright beam at night and the SF gets reflective taping on both wheels.

Bajaj decks its AS 150 with a good-looking digi-analogue instrument console that displays the time, has a shift-indicator light and a side-stand engaged text — all neatly displayed along with a digital speedometer and analogue tachometer. The bike has handle-mounted rear view mirrors that work really well. The switchgear is blue backlit and the grips feel soft to touch. The manufacturer also provides a hinged fuel-filler cap on the AS 150.

The Gixxer SF, on the other hand, has an informative fully digital instrument console, which most importantly displays the engaged gear and time as well. Suzuki also provides a bright shift-warning light here. The SF gets fairing-mounted rear view mirrors which work well, but feel a bit wide and stick outward when negotiating traffic. Grips and levers impart a feel-good factor on the SF.

The AS 150 tail-light is borrowed from its sibling the 200NS and so are the black grab handles mounted just above it. Good bits such as the alloy footrests and the side-mounted steel engine guard give the bike a premium feel. Going with the new trend, the exhaust unit is neatly tucked away under the bike.

The well-contoured stepped saddle is a single unit on the SF. The motorcycle shares its tail-light with the Gixxer. Grab handles are nicely integrated in the rear panel design, making it seem like a single unit. Suzuki provides a side-mounted, twin-port exhaust on the bike, which is finished in titanium-like paint that is also heat resistant.

Overall quality and fit and finish on the Pulsar and the Gixxer are top drawer, with Bajaj consistently improving quality of materials used.

Thumb-start the AS 150 and its engine instantly settles into a vibration free and potent hum. 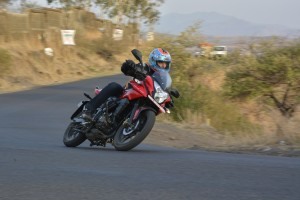 The 149.5cc, single-cylinder and carburetted engine produces 16.8bhp at 9,500rpm and 1.3kgm of torque at 7,000rpm. Bajaj provides the AS with its patented twin spark technology. Rev the bike hard and the needle swings rapidly past the red zone as the refined, smooth and vibe-free engine revs willingly to meet its limiter at about 11,000rpm. The bike has a particularly smooth shifting and 5-speed gearbox, in a 1-down and 4-up pattern. Bajaj also provides a light-action clutch here for seamless shifts.

The Suzuki on the other hand has a 155cc, carburettor-fed engine that makes a lower power of 14.6bhp made lower down at 8,000rpm and a slightly higher torque output of 1.4kgm made earlier at 6,000rpm. The bike has a slightly gruff-sounding engine when revved hard but this does not result in vibrations felt anywhere. Power delivery is linear and is spread 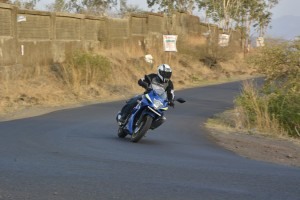 across a wide powerband, which is the reason why we didn’t need to downshift much here. The Suzuki bike’s engine is mated to a 5-speed gearbox and each gear slots in with precise feel in a 1-down and 4-up pattern. The bike’s clutch is well weighted and operates with a light feel.

On the AS 150, we managed to receive 40.2kpl in the city and 44.4kpl out on open roads, cruising at an indicated 90kph. The SF managed a bit more on this front, dishing out 42.5kpl in the city and 45kpl on the highway. Both motorbikes have identical, 12-litre fuel tank storage capacities.

Winner takes it all

The AS 150 and SF come with their own special features, and an important factor in the end is to consider how much they cost. The Gixxer SF costs Rs 83,500 while the Pulsar AS 150 will set you back slightly lesser, at Rs 79,000 (prices ex-showroom, Delhi).

Choosing between the two, it has to be the Gixxer SF. This motorcycle, even though priced at a small premium, is a well-rounded package and feels a bit more enjoyable to use within city limits and on the highway. The bike also shines brighter when let loose on the twisties, where its handling genius is an eye-opener. The AS 150 is made for a more relaxed journey and also feels smoother around the edges, but lacking that all-round magic that Suzuki has achieved on its SF.