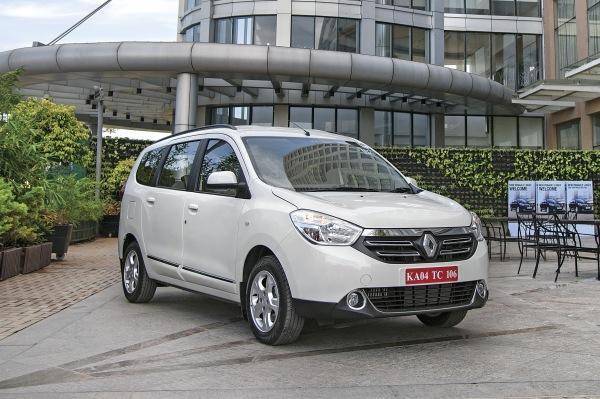 Renault’s first success in India was the Duster. The popular SUV is the sole pillar in the company’s product portfolio on which Renault’s fortunes in India rest. Now, three years later, the French company has introduced its next important model – the Lodgy – which promises to reinforce Renault’s Indian portfolio significantly.  The Lodgy may be the company’s first MPV in India, but the French automaker is no stranger to people movers. In fact, 30 years ago, it invented the segment with the Espace. But here in India, this segment is already flocked by popular brands like Maruti and Honda. So do the MPV innovators have a trick up their sleeve? 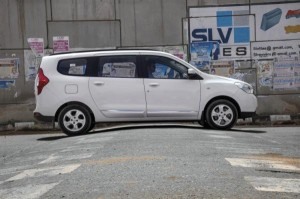 The Lodgy – which is priced in the range of  Rs 8.19-11.79 lakh – falls right in between the compact (Ertiga, Mobilio) and the larger ladder frame MPVs like the Aria and Innova. This has landed the Renault MPV in a strategic sweet spot to tempt potential buyers from either end of the segment. We have tested the more powerful 108.6bhp diesel to see if the Lodgy is all the MPV you’ll ever need. 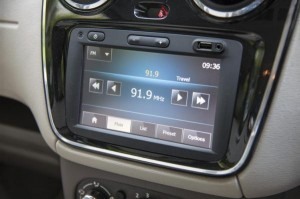 Unlike the majority of its rivals, the Lodgy is only available with a diesel heart — the popular 1.5-litre K9K engine. Equipped with a single camshaft for its eight valves, the four-cylinder motor may not be cutting-edge in terms of technology, but is a very flexible unit. Just like on the Duster, the engine is available in two states of tune – 83bhp and 108.6bhp – with different turbochargers and injection systems responsible for the varied power output. In addition, the ECUs used by the engine on the two variants are different. The more powerful version tested here, THP in Renault-terms, gets a variable-geometry turbo (as opposed to the fixed-geometry turbo on the 83bhp version) and also comes with an intercooler.

The 1.5-litre diesel motor pulls really well once revs rise beyond the 2000rpm mark and carries 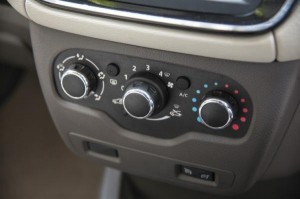 on till 4000rpm, after which the power tails off. When the roads open up, the powerful mid-range means that as long as you’re not in sixth gear, it is easy to overtake cars at characteristic highway speeds. However, while the final gear doesn’t help you gather pace quickly, it’s a great cruising tool that keeps the engine spinning at just about 2,000rpm at 100kph – great for stretching your fuel tank.

The Lodgy reaches 100kph from a standstill in 11.5 seconds, making it, the fastest MPV on sale here. That said, the motor’s initial turbo lag and the slightly heavy and snappy clutch make driving this Renault in stop-go traffic a little unwieldy. However, off-boost power isn’t too bad, and unless you really want to make quick progress, it won’t warrant many downshifts. 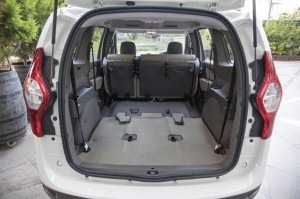 This engine is mated to Renault’s six-speed manual gearbox, and while it doesn’t require much effort, the gearshifts could have been more precise. To aid drivability, Renault has kept first, second and third gears on the shorter side, to keep the engine on song in typical city driving circumstances whilst the fourth, fifth and sixth gears are tall, to aid highway cruising.

This is one department where the Lodgy excels. It smothers the biggest of potholes with ease and even on rough roads, you can maintain a fair bit of pace. In fact, the faster you go, the better the ride. This isn’t surprising when you consider that its underpinnings are based on the Duster. But compared to its SUV cousin, the Lodgy doesn’t have the same suspension travel or the larger wheel size, so it does thunk through some of the extra-large potholes. However, for an MPV, it easily sets a benchmark. 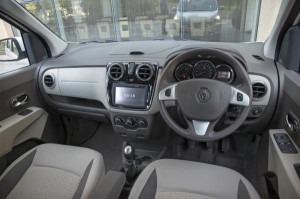 Also, Renault has worked hard on the refinement and it has paid dividends. The cabin is very well insulated from the outside and it’s only when you cross the three-digit mark that there’s some wind noise entering the cabin through the A-pillars. Renault’s saving on sound-deadening material, like the rubber beading on the doors, is the possible cause.

As for handling, the Lodgy feels very stable at high speeds and rarely gets out of shape – the long 2810mm wheelbase helps directional stability. Even at normal speeds, the handling is pretty inspiring for a high-riding people carrier. There is a bit of body roll due to the soft suspension set-up, but never too much making you always feel in control. Also, when you want to have fun, the car’s direct steering is quite rewarding. But it does take some getting used to, as it doesn’t weigh up sufficiently at speed and is very quick off-centre with no slack. Even the brakes feel a bit grabby and the pedal lacks progressive feel. 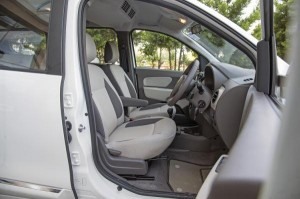 Slide into the Lodgy’s cabin and you are welcomed by a pleasant ambience. The light colours, low dash and large glasshouse make the interiors very airy. The dashboard design is quite similar to the Duster’s, but thanks to the glossy-black centre console and silver inserts, it actually feels plusher. The quality and finish, though not as good as the Innova’s, is quite acceptable. However, bits like the air-con controls feel a little low-rent and are clunky to operate. Being a practical MPV, there are loads of cubbyholes and bottle holders in the cabin.

The upshot of the large exterior dimension and boxy shape is the amount of real estate inside the cabin. Front seat occupants have plenty of room, the visibility out is great and the seats are comfy too. The middle row is quite spacious as well, but lacks the option to slide the seats – this would have given the Lodgy the flexibility that some of its rivals offer. You also have the option to choose between captain and bench seats here. While the captain seats are quite comfortable and also come with leather upholstery, the bench, although not as supportive and somewhat lacking in thigh support, is good enough. The MPV’s generous width also makes travelling three abreast comfortable. The last row offers sufficient head-, knee- and shoulder room, but the rear wheel wells eat into the width, making it good for two only. Like in most MPVs, the high floor results in a knees-up seating position.

With all rows up, there’s hardly any luggage space, so if luggage capacity is a priority, it’s best to travel with five passengers. Renault has cleverly made a provision such that the Lodgy’s third row can be entirely removed, and when you fold the second row as well, you get a massive 1,861 litres of luggage space. 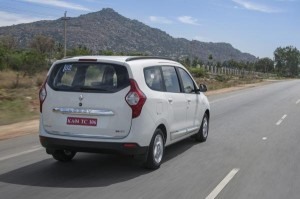 In terms of kit, the top-of-the-line Lodgy is quite well equipped. The infotainment system comes with a touchscreen interface, sat nav and can play music through USB, aux-in or Bluetooth. However, the MPV lacks a CD player. It also gets air-con vents and 12V charging sockets for each of the three rows.

On our city cycle, the Lodgy returned 12.3kpl, and 17.5kpl on the highway. These figures are very impressive when you consider the car’s size and weight. The economical engine combined with the large 50-litre fuel tank gives the Lodgy a phenomenal range of 750km between fuel stops.

Renault seems to have wiggled into a sweet spot in the crowded MPV market with the Lodgy. It mixes space, comfort, good driving dynamics and strong performance into a convincing package. As a family car, this MPV is hard to beat. It makes for a happy companion, especially on holidays, thanks to its unrivalled cruising ability and long fuel range. It’s not all perfect though. The quest to liberate as much room as possible has made the MPV a touch too boxy, which could be a deal breaker for some. Also, at Rs 11.79 lakh for the top-end RxZ 110 diesel, it is on the pricier side. However, you do get a fair bit for your money, which makes the car reasonable value too. The only real issue is, Renault’s service network doesn’t as yet cover the entire length and breadth of the country. But the MPV’s proven mechanicals, which are shared by the Duster, should give owners peace of mind.