We see what has changed with the facelifted SUV. This is the facelifted version of the XUV500 builds on the last round of updates made to the SUV in 2013. While the fundamental shape is retained, there’s a restyled front end that’s home to a more contoured hood, Scorpio like new grille and restyled headlights with new Z-shaped LED light guides. The front bumper is also new and has thankfully lost the finicky ‘cheetah-inspired’ details of the original model. The whole look is less of a jumble of diverse elements now but flashy details still thrive such as in the chrome shrouds for the new high-set auxiliary lamps. A new design for the 17-inch wheels, rear view mirrors with incorporated puddle lamps, chrome lining for the window line and a chrome trim above the number plate are the most notable changes in another place on the exteriors of the facelifted SUV. 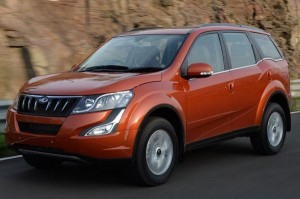 There’s a whole lot of changes in the cabin too. The new black and beige interior theme looks upmarket and fit-finish has improved as well — those shiny soap box plastics on the centre console are finally a thing of the past. Sporty aluminium pedals and blue backlighting (in place of the earlier red) have also helped the new feel. Also considerably reworked is the Visteon-developed 7-inch touchscreen infotainment system. The touch interface is among the smoothest around and also boasts better functionality as it doubles up as a display for the new rear-view camera. While we couldn’t test it, Mahindra’s updated Blue Sense app also allows passengers to hook up their phones to the system to control audio and air-con settings – handy for the chauffeur-driven. The new SUV also sees the addition of a fourth and range-topping W10 variant that gets items like keyless entry and go, an electric sunroof and even a six-way adjustable powered driver’s seat. As before, seat comfort is good so long as you or your occupants don’t intend to make much use of the cramped third row.

In terms of the mechanicals, there’s nothing thoroughly different on the revised SUV. It still uses 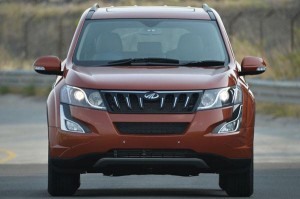 the same 138bhp 2.2-litre, mHawk engine and buyers still have the option to choose between front-wheel drive and all-wheel drive versions. The notchy-in-operation six-speed gearbox is the same too but final gearing has been revised to aid in-town driveability. While we didn’t find a far-reaching change in the way the facelifted SUV drives, it did feel more receptive to throttle inputs in lower gears. What helps is the clutch that is more progressive and a lot easier to modulate now. Owners will also be happy to note ARAI tested fuel economy is now 16kpl. Helping in part here is a ‘smart’ alternator that decouples when it detects the battery is fully charged, thus reducing load on the engine. Improvements have been made to the XUV’s dynamics too. The steering, dampers, springs and anti-roll bars have been optimised while Bosch’s latest ESP system has also been drafted in. While the smooth surface of Mahindra’s Chakan test track wasn’t ideal to pass a final judgement on ride quality, we did find a marked decline in the unsettling nose dive under hard braking and torque steer in heavy acceleration. But before you think otherwise, the XUV is still not perfect in this area. The front-wheel drive version is prone to understeer and strong steering kick back remains an unsolved issue.

In its revised form, the SUV makes a more convincing case than before. The revamped styling,

enhanced cabin ambience and longer equipment list build on the SUV’s traditional strengths. At the same time, the SUV has become better to drive too. Sure, there is still room for improvement but to the standard buyer looking for an all-round SUV that delivers on style and value, the XUV500 remains among the best choices around. More so when you consider that variant-for-variant, the Mahindra SUV costs about as much as before. The lower W4 and W6 variants have been priced at Rs 11.2 lakh and Rs 12.5 lakh (ex-showroom, Delhi) while the higher spec W8 costs Rs 14.2 lakh (in front-wheel drive form) and Rs 14.9 lakh (in all-wheel drive form). The new W10 variant has been priced at Rs 14.99 lakh (front-wheel drive) and Rs 15.99 lakh (all-wheel drive).