The Elantra gets a host of cosmetic changes outside and in. 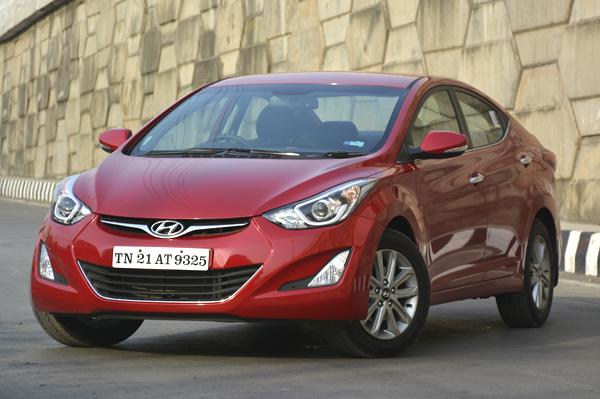 The facelifted Elantra gets a host of changes to its exterior styling and interior along with more features as well. However, to spot the exterior changes on the new car, you would need to look very closely. The most noticeable new bits are the headlamps, which now have a blacked-out housing, integrated projector elements, and a really cool looking LED-illuminated strip. It also gets new L-shaped fog lamps that sit inside deeper enclosures in a front bumper that is more contoured. The only noticeable change on the flanks are the new 16-inch alloy wheels, but move to the back and you’ll discover a new rear bumper, new chrome exhaust bracket and new tail-lamp units with faux-LED looks. These changes help the Elantra look even more upmarket than what it already was, but don’t really transform its appearance. The more significant changes however, are on the inside. Hyundai has traded the beige and grey two-tone colour scheme for a black-and-grey one. The dashboard also gets minor changes, with a new audio system and the addition of a 4.3-inch colour touchscreen in place of the old-fashioned monochrome screen. The screen now acts as the display for the rear-view camera, in place of the small rear-view mirror-mounted one before. The tiny central air-con vents have also been replaced by larger ones that now sit higher on the dashboard flanking the infotainment screen. The air-con display, like with other new Hyundais, gets a more upmarket-looking blue-on- black monochrome display instead of the black-on-blue colour. The small air-con control buttons have also been replaced by larger, easier to operate ones. Hyundai has also given the car metal-finish pedals.

Thanks to this car’s large exterior dimensions, there’s plenty of space on the inside. There’s 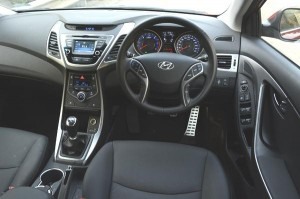 abundance of legroom for rear-seat passengers and the rear bench itself is comfortable, with good thigh support and a flattish floor. However, the seatback is a bit too reclined and the swooping roofline eats into headroom. Also, the rising shoulder line reduces visibility from the back seat. The rear armrest, however, lacks the audio controls that were available on the previous car. The front seats are supportive and wide, making even long journeys comfortable. As ever with Hyundai, the Elantra is still very well equipped, and apart from the new colour touchscreen, you’ll find things like auto headlamps, keyless entry and go, cruise control, electric front seats with ventilation, six airbags, ESC and of course, Bluetooth. 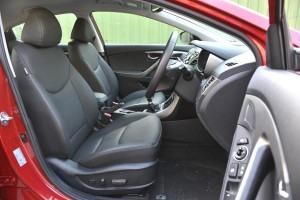 The engines remain untouched, and that means a 1.8-litre petrol engine that produces 148bhp and 18.1kgm, and a 1.6-litre diesel engine with 126bhp and 26.5kgm of torque. We drove the diesel manual variant of the car, and as before, driving it in traffic requires a bit of gear shifting, as the engine falls off boost below 2,000rpm; but there is good punch and ample power for stress-free overtaking and cruising. The engine is also one of the smoothest and quietest in its class, but the clutch is on the heavier side and which can be tiresome over long journeys.

Like before, the Elantra is excellent at ironing out bumps at low speeds. Even high-speed 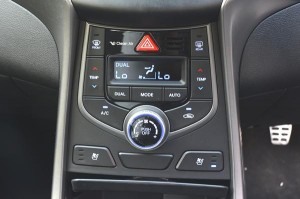 stability is very good, though the softly-sprung Elantra does tend to bounce, and also to roll a fair bit when driven fast. What’s nice is that, save for some tyre noise, the cabin is well insulated from the happenings outside, and this along with the refined engine helps make this Hyundai a soothing cruiser.

With the Elantra, Hyundai has gone further to bolster its core strengths. It looks even better than before, has a plush, new-look cabin and, as with every Hyundai, it also sports an extensive features list. The Elantra may lack the sophistication of its European rivals or exceptional in any one area, but it remains a very well-rounded car that’s easy to live with. The Elantra’s top SX diesel manual variant is priced at Rs 16.68 lakh, and it still undercuts many of its rivals by some margin, which makes it a great value too.