Seductively stylish, with red-blooded performance and all that Italian allure wrapped around a machine that can be enjoyed more often and by a lot more people than Ducati’s superbike flagships, the Monster really shows its importance in the Italian company’s portfolio. Ever since it’s creation in the 1990s, the Monster family has been Ducati’s chart-buster. In the ’90s the model revitalised Ducati’s fortunes by drawing new riders into the Ducati family. In 2015 the Monster family’s task is no different in India, as the brand rebuilds its relationship with India. To seduce the young – and the young at heart – Ducati has brought an eight-strong Monster line-up to India. While Rs 20 lakh and above for a Monster 1200 might be a no-brainer for some, it is the more affordable range that will be of interest to a majority of riders. The Rs 9.6 lakh Monster 821 will soon become the entry level offering, as the 795 and 796 are no longer in production and will be available only till stocks last. But the 821 is ready to take the family forward. 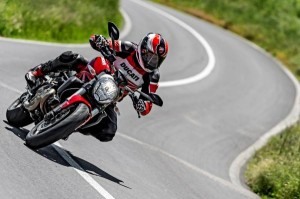 This Ducati Monster 821 is the new, third-generation motorcycle, and as can be anticipated, it is loaded with tech. No, I don’t mean the liquid cooling for the engine, which is a bold new step for the family. I mean the ride-by-wire system, which gives you different rider modes to choose from. These are bundled with presets for the eight-stage traction control and the three-stage ABS, although the rider can customise this. Of course, there’s power too – 110.5bhp, which is restrained to 75bhp in Urban mode. The torque is greater too, but like the horsepower, it is built a litter higher up in the rev range. No worries though; the new 53mm throttle body and the injection system is optimised to boost low and mid-range torque. And the gearing has been revised too. But would any true Ducatisti sign a Monster off the drawing boards at Borgo Panigale without manic top end? I doubt it. We’ll find out shortly.

But before we get going, it’s clear that the new design for the Monster is more muscular. As a 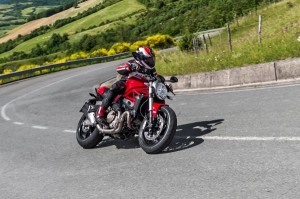 whole, it carries on the family look neatly. A closer look reveals that many lines, like the hunch on the new larger 17.5-litre petrol tank. But there is a greater sense of girth, especially when you look at the tail section. The standard seat looks generous too, for rider and pillion, and thankfully, those bulky under-seat exhausts are now gone, replaced by a 2-1-2 system that exits lower down on the right. The 10-spoke alloy rims are wrapped with Pirelli’s Diablo Rosso II rubber, which the manufacturer claims has a carcass that improves bump absorption. Sitting on the 810mm saddle, it’s clear the bike isn’t going to be a bother for shorter riders. However, the regular seat comes with a ‘low’ setting, which drops seat height to 785mm and that should make it easy even for five-footers. An optional low seat drops seat height to a super accessible 745mm. From the saddle, you do get a typically unhindered view ahead – just the large tank, a single piece handlebar and the instrument cluster. Ducati’s new-generation LCD display seems suitably inconspicuous, yet futuristic. Slim and purposeful, it looks like it’s come from a race bike. Thankfully, the ergonomics haven’t. The bike maker has thankfully pulled the handlebar back for a more upright seating position. A quick glance around shows that the build, though good, features few sharp edges to the plastics here and there. The pass flash switch looks a bit jagged and the shroud for the radiator looks a bit fragile too. However, the aluminium stems for the rear-view mirrors are a nice highlight, and the brake lever is span-adjustable.

First thought as I crank the engine is that the bass and rumble from the new exhaust is brilliant. 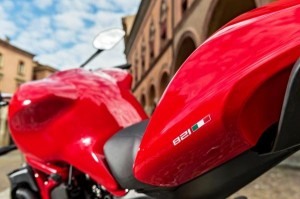 Outside, on the roads the Monster felt more at home in slow traffic than the 796 ever was. The engine felt smoother and the shorter gearing let us crawl around at under 20kph – something that the 796 absolutely couldn’t manage! I was impressed to see that it could canter around at 30kph in third gear and that it responded to small throttle openings to slip through traffic with just a bit of a shudder. It’s clear, though, that the bike isn’t thrilled about maintaining this pace, and the L-twin starts to lug in giant pulses if the revs and speeds drop too low. The good news is the 821 engine will oblige you with how it handles city duties, but just don’t expect it to love it there.

What the bike loves is speed, and revs – oh yeah. The bottom end is ample, it gets furious when you cross the 4,000rpm mark, and just when you think it’s plateauing, things get even more blurred as you head up past 8,000rpm. So heady is the rush of acceleration that the front wheel keeps getting light as you hammer down a straight. On the faster roads and around the squiggly bits, I switched to Sport. The throttle in this mode is direct and the engine response is always very crisp. The sense of connection between the throttle and the rear wheel feels very mechanically linked. 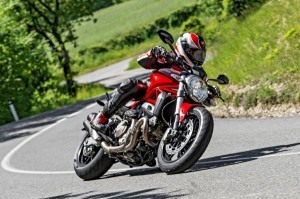 The Touring mode, on the other hand, has a softer throttle response without limiting power. However, the response still seemed a bit too quick for touring, as the motorcycle tended to surge ahead with even a light twist of the grip, albeit with a slight delay. The seat, although super for short blasts in the city, is a touch too soft for long rides. On the upside, the suspension and the tyres work almost unbelievably well to dampen out the irregularities of the road surface, and there were plenty of rumbly bits and small potholes to test it out on.

So the Monster can go further and more calmly too. What helps it along is the new chassis. 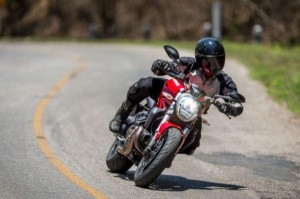 There is a greater sense of stability that will inspire confidence in riders of all skill levels. Sport riding enthusiasts will find that the seating position, although more relaxed and less likely to cause backaches on long rides, is still sporty enough for when you want to switch into attack mode. The biggest improvement, then, is the smoothness of the Monster on corner entry. It no longer feels sudden and you can meter its line of attack pretty well. The Monster’s weight, although mostly invisible, felt apparent over some of the bumpy corners, but only just. The road conditions and the tyres didn’t always inspire the greatest confidence to push further, but there’s no doubt I am eagerly looking forward to riding this motorcycle in India on a familiar road.

The Monster 821 will officially go on sale in India in June, with deliveries starting in July. With its pedigree of Italian appeal, humongous performance, class-leading electronics and increased comfort that make it more usable, the Monster 821 makes a solid case for itself, even after taking the higher price into account. Yes, the 821 has learnt how to deal with urban environment, but don’t think of it as an natural daily commuter. After all, it is a Monster and it loves the red end of the rpm range.