We see just how good is Bajaj’s first fully-faired bike. Bajaj has put in several R&D months perfecting its first fully faired Pulsar. The bike is the latest entrant in the mini supersports class here in India. The segment today has only a handful of options, which are often pricey, so, a well-priced option in the division is sure to persuade new buyers seeking thrills and this is where the company would like to capitalize, with the introduction of its RS 200.

To see the light of success however, needs to offer a lot, which includes the right mixture of power, comfort and handling all in a good looking package. Can the Bajaj Pulsar RS 200 make the cut? 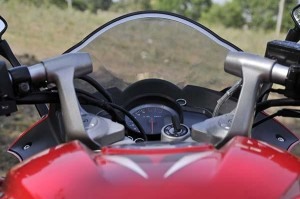 Bajaj provides a well suited powerplant on the Pulsar RS 200. The basic engine structural design remains in common with the Pulsar 200NS, but in a different state of tune, along with the addition of fuel-injection. The bike has a 199.5cc, four-stroke, single-cylinder and liquid-cooled engine that now makes slightly more power, 24.2bhp and 1.9kgm of torque.

The new Pulsar comes with a four valve-per-cylinder head with single overhead camshaft drive. The bike also uses Bajaj’s patented triple-spark technology. The clutch has a well-weighted feel, and the six-speed transmission shifts accurately, in a one-down, five-up pattern via a toe-shift lever.

The RS 200 is good for continuous cruising on the highway at an indicated 110kph. It’s a quick bike and can sprint to 60kph in a respectable 3.76 seconds, thereafter achieving 100kph in 9.71secs. We achieved a true top speed of 137kph, the engine reaching maximum rpm in sixth gear. The fairing works well, helping the rider to achieve high speeds thanks to its thoughtful aerodynamics.

Throttle response is nice, and the power delivery smooth. The Pulsar RS 200 is a really refined 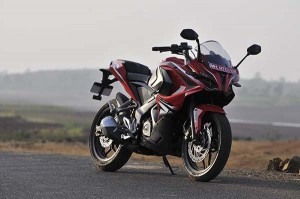 motorcycle. The bike has a wide powerband, with output in a nice, linear flow, although in typical sportsbike territory, Bajaj has kept this a really fun bike to ride, with performance best when up-shifting with the revs edging redline territory. The Pulsar RS 200 lives up to its sporty tag, with a heady, invigorating rasp emitted at the silencer when riding at high speed, and the high revving engine performs at its best when ridden at the race track. Bajaj has engineered the bike to make you want to ride hard, and fast. The RS 200 easily lives up to being the sportiest of all Pulsars to date.

The RS 200 gets the tried-and-tested twin-spar, steel fabricated frame from the 200NS. The kerb weight is a shade on the heavier side, at 165kg, although this is not a bother when on the go.

The rider sits upright on the Pulsar RS 200 but with a little lean into the handlebars, not unduly straining the wrists. Bajaj provides the bike with a well-padded, roomy split saddle, which is comfortable enough for a bike with such sporty nature. 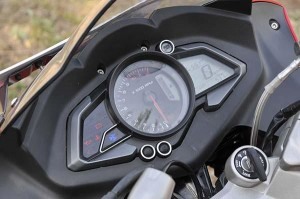 A pair of 37mm hydraulic, telescopic forks are featured upfront and an eight-step adjustable, gas-filled monoshock is provided at rear. Ride quality is good, neither too soft, nor overly firm. The bike absorbs bumps well, with a nice, sporty and firm feel, the new Bajaj bike remaining nicely settled while negotiating undulations mid corner as well.

A delight when cornering, the Pulsar holds its line well due to its taut suspension and this is further enhanced thanks to really grippy MRF rubber. The Pulsar RS 200 is an agile handling motorcycle, not quite as quick to turn in and flick around precisely as KTM’s RC200, but then again, providing more comfort than any of its Austrian siblings.

This is the first Bajaj motorcycle to offer the added safety of ABS brakes, although this is via single channel, working well but only for the front wheel. The front end has a 300mm petal type rotor, while the rear is equipped with a 230mm petal disc. We managed to get the bike to halt in a decent 17.96 meters, in 2.4 seconds. 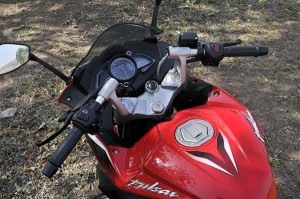 This time around, Bajaj has equipped the bike with fuel-injection, and along with its triple-spark technology, the bike managed fairly good fuel-economy. The RS 200 returned us a decent 34.2kpl in real world city riding conditions, this going up to 43kpl when cruising at more steady speeds out on the highway.

Bajaj has created a motorcycle that is sure to appeal more to the younger generation, who appreciate and aspire for more flashy looking bikes. The bike is sure to provide a fair share of thrills for both, new and veteran riders, who will appreciate the bike for its largely versatile nature being sporty enough to head to the race track where it does hold its own and do the company proud, while still being comfortable too. The engine is flexible enough to tackle bumper-to-bumper traffic and shifting through the six-speed gearbox at high revs is a pleasure out on open roads. The RS 200 is a capable tool for track days and the occasional ride out of town, a good leisure activity for many. Having ridden the bike on the race track and in traffic, we rate the bike a good motorcycle. The entry level Pulsar RS 200 is priced at Rs 1,21,069, while the ABS equipped version costs Rs 1,33,094 (ex-showroom, Pune).