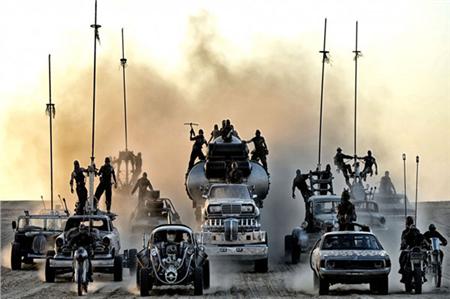 George Miller is not your regular Hollywood director. He was born and brought up in Queensland, Australia. He grew up in a rough neighbourhood where car accidents were recurrent, and often, bloody. While most would have hated cars after witnessing these events, these experiences only helped with his craft. And it’s evident in the sequences in the popular film series directed by him – Mad Max.

The Mad Max series is set in the distant apocalyptic future, centred around the action-packed life of a ruthless lawman called Max Rockatansky. The first three films starred Mel Gibson as the protagonist, and he’ll be replaced by Tom Hardy in the latest installment, Fury Road. In this film, Max has to take on an entire legion of armed raiders called the War Boys.

As always, what excites us most about a Mad Max movie is the cars. In Mad Max Fury Road, a total of 18 vehicles have been used. Here’s a look at the deadly wheels you’ll catch on screen. 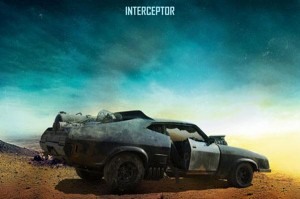 The Interceptor, is the car our hero, Max Rockatansky, uses to raise hell in the Wasteland. This creature is a highly modified 1973 Ford Falcon XB GT. Also called the “Pursuit Special”, the stock car was a limited edition hardtop. The menacing black paint scheme that adorns the roof, boot spoilers, wheel arch flares, front nose cone and the air dam are all custom-made, but were later marketed as the ‘Concorde’ style. The rear wheels and side-pipes have been changed. The back window and boot lid were removed to accommodate two cylindrical fuel tanks, to add to the overall cosmetic effect. The car also has a non-functioning supercharger that is run off an electric motor. 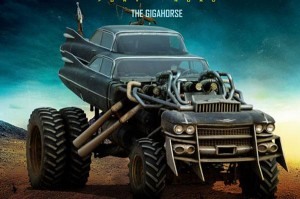 The Gigahorse, driven by the main antagonist, Immortan Joe (Hugh Keays-Bearne), is an engineering marvel in itself. It is built on a truck chassis, and has two 1959. Cadillac DeVile cabs mounted on top of each other, to give it a two-up view, not unlike an Apache attack helicopter. The bottom cab is custom-made, and has a wider windscreen. The upper one has two harpoons at the back. This monster is powered by two 8.2-litre, 502bhp Chevrolet big block V8s with custom manifolds and superchargers. The engines are connected through a specially-designed straight-cut gearbox. After each day of shooting, the gear teeth had to be realigned so that the meshing would be perfect the next day. The Gigahorse runs on huge 70-inch tractor tyres. It has a top speed of 95 kph. 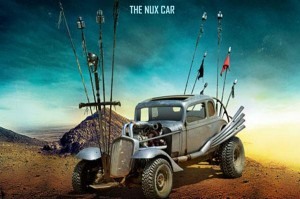 The Nux car, driven by, well, Nux ( Nicholas Hoult), is a classic beauty with claws that thirst for blood.  Based on a 1934 Ford Deuce Coupe, it has an engine that is both supercharged and turbocharged.  The car has a basic nitrous-oxide installation, and is designed to go very fast in reverse. Nux is shown as a demented V8-lover, and his car does live up to his image. 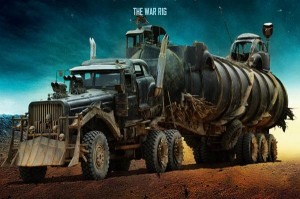 The War Rig, driven by Imperator Furiosa ( Charlize Theron), is based on a Tatra 6 x6 truck. The War Rig is used to tow two tankers, which are also used as attacking platforms by the War Boys. Weaponry consists of two Volkswagen Beetle turrets mounted with harpoon-guns. It also contains two non-functional Holley superchargers that are used to depict two engines. The large dozing plate mounted on the bonnet is designed to deflect gunfire. It is the largest vehicle in the Mad Max franchise. The FDK is another example of wild design. It is a scout vehicle assigned to protect the People Eater’s Limousine (John Howard’s car). It is based on a Volkswagen Beetle, and has extra fuel drums, a functioning flame thrower, off-road wheels and a truck-like dual wheel setup. The engine is a supercharged V8, naturally. A tower of carburettors? Check. A rear-mounted machine gun? Check. A caltrop dispenser? Check. This demented car was at one time a Holden 50-2106 Utility Coupe. The car was first transformed into a rat rod by lowering the suspension, reducing the roof height and fitting a custom V8 to it. The non-functioning carburettors and belt-driven supercharger came afterwards. For Mad Max, it was christened Cranky Frank, after its psychotic owner, who is also the bodyguard of the villain, Immortan Joe ( Hugh Bearne-Keys). This vehicle is the guide car for the War Rig. 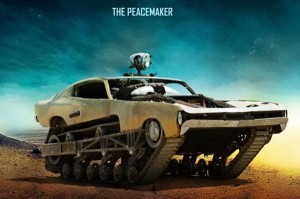 What happens when you add a Chrysler Charger body to a US Army Ripsaw light tank? You get the Peacemaker. Part tank, part car, this is the vehicle of choice for the Bullet Farmer. Powering the Peacemaker is a water-cooled Merlin V8. Like we always say, a V8 can solve any problem. The Ploughboy is based on a Holden EH wagon, and has a specially-designed off-road frame. It is equipped with a harpoon and a hydraulic plough. It used to be a convoy vehicle in the previous films, but is used as a reconnaissance vehicle in this one. 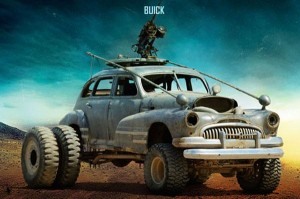 The Buick, which has the body of a car from the 1940s, is an instrument of off-road mayhem. This car features a rally differential, dual rear wheels and a dusty blue paint job. It is assigned to be the standard-bearer for the War Boys (the bad guys). It features ring-turret machine guns and anti-aircraft guns, and also performs a function similar to that of a destroyer in a naval convoy. 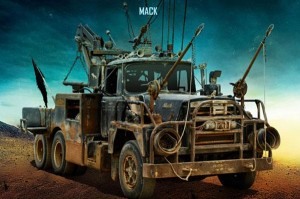 The Mack, as the emblem on the battered engine cover says, is a scavenger truck. Its job is to sweep the area around the convoy for any spare parts. It is based on a Mack-R Series truck, is literally built like a tank and has more guns than a battleship. The Mack is also symbolic of the love of the truck in Australia. 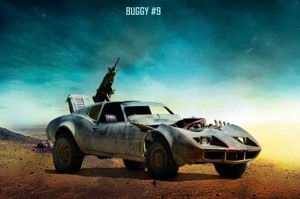 Believe it or not, this contraption was supposed is based on a Corvette C3. The Corvette, being right-hand drive-only, could not be sold in Australia. A Sydney-based company called Custom Performance Modification had a bright idea. They mated the fibre-glass body of the Corvette to a Holden 1-ton truck chassis. The truck chassis was 22-inches longer than the body shell, and thus was born the Buggy #9. Muscle car purists will surely scoff at the idea. But wasn’t that the whole idea behind Mad Max? It has an external rear seat and a pintle-mounted machine gun as standard. 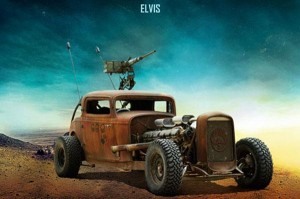 The Elvis was created by welding together two GMC mini-truck chassis and then giving it a 3-door body shell. It has a fully-functioning V12 and nitrous injection and a roof-mounted machine gun. The Elvis is supposed to accompany the War Rig when the War Boys go hunting. The Dodge is probably the most authentic of all the Mad Max…erm..cars. It is an old-school 1950s Dodge hot rod with a Roots turbocharger. It is probably as well-detailed and capable as the Nux car. The Valiant is the other example of classic Australian muscle. The car used for the movie has its base colour stripped away, with the classic red and white flames painted specifically for the movie.  The car has a naturally-aspirated V8 engine, a Molotov cocktail grenade launcher and a flame-thrower. 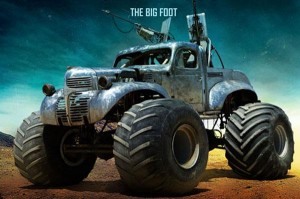 The Big Foot is a monster truck based on a Dodge Fargo Truck. Its transformation from truck to monster truck was effected by 66-inch Goodyear tyres, a supercharged 9.6- liter V8 engine, 4 feet of suspension travel and a Turbo 400 automatic transmission. It also features two turret-mounted harpoon guns, just in case. 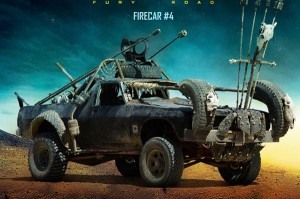 The Firecar #4 is something that is straight out of a nightmare. Built using a Holden FZ Ute, the machine is assigned scout duty. It has raised suspension, wide, knobbly radial tyres, and the customary scary bits like a sun-dried bison skull on its bonnet. This porcupine of a car is actually a 1937 Plymouth. According to rumours, the metal shards welded all over the body of the car were actually pieces of scrap metal that remained after the bodywork of other cars was completed.  It is called the Plymouth Rock 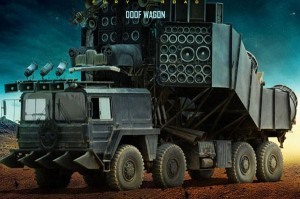 The comically-named Doof Wagon was, in its previous life, a MAN 8 x 8 missile carrier truck. It is the war drummer of the War Boys. It has huge speakers made out of air-conditioning ducts that are used to blare out the War Boys’ war cry, with mounted drummers providing a Taiko beat for further effect.

All the cars in the movie are real and fully functioning. All the stunts are real and the director says that 90 percent of the movie has been shot and not digitally created. Mad Max: Fury Road will be releasing globally on May 15, 2015.

Our verdict: A must watch!