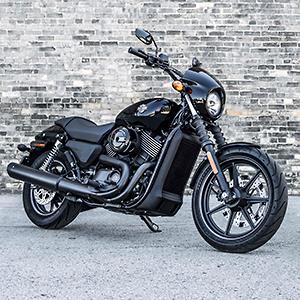 From commencing its operations in India back in 2009 to manufacturing its first bike here, Harley Davidson’s relationship with the Indian bike market has come a long way. Not only are new units of the bike selling but also used bikes in Delhi. The bike was launched in the month of March of 2014 although the Street 750 was announced way back in 2013 September. It is the premier motorbike platform from Harley Davidson ever since the launch of the V Rod which was 13 years ago. The bookings for the bike are open currently.

Street 750, much like other Harley bikes, is a big cruiser with a clean biking fairing nesting the circular headlamp. The Street 750 can be customized by excluding the fairing in front which would leave your headlamp exposed. The bike is low and sinewy and offers a power packed presence, which will definitely attract the eyeballs of bystanders when you are out cruising. There are rubber boots to protect the telescopic front fork pipes. A standalone instrument pod has been included which has a speedometer that reads up to 180kmph. There is a plush feeling in the Street 750 and there are higher quality grips, which is there in all Harley bikes. However, there is a lack in the switch gear quality and the mirrors could have provided improved rear view images.

The teardrop shaped tank is typical of this cruiser and there is a filler lid which is offset and lockable. The tank moves smoothly back into a riding saddle which is distinctive and wide with a stepped tail. It makes the Street 750 very easily recognizable. The fitting finish and overall quality is not enough on these pilot bikes and they are not at par with other Harley bikes that are available in the country. There is a lot of scope for improvement in terms of finishing and quality compared to the new and used bikes in Delhi available from Harley.

The bike is powered by 60 degrees, 4-stroke, V twin 749 cc that has fuel injection which is typical of Harley. The engine has been named Revolution X and it has 4 valves for each cylinder which are chain driven using overhead single camshafts. It takes up a notch on numerous Harley bikes by offering liquid cooling which is evident from the massive radiator installed. It is placed on the front part of the bike a little below the motor. The Revolution X engine puts out enough torque which is around 6.62kgm in 4000rpm which translates into an easy and nice flowing delivery of power on road where the performance feels quick for a cruiser bike with these proportions. The power figures are not revealed by Harley as a part of their rules, but when you ride the bike it would feel like 55 to 60bhp. A toothed belt from Harley transfers the power to the back tyre. The belt drive aids in making the Street 750 quiet and it is a dependable system which suits India’s driving conditions by calling in lowered maintenance when compared with a drive chain.

Harley Davidson dedicated a lot of time to ensure the liquid cooled, new generation Revolution X does not compromise on the acoustic. The Street 750 2-in-1 exhaust system puts out a throaty, exciting and pleasing sound rumble which can be modified quite easily in case you want a louder sound. The Street 750 has a smooth functioning and well weighted clutch and a gearbox that is compliant with 6 speeds. It shifts quite smoothly and with precision. There is a light feel in a 5 up and 1 down pattern. The stylists at Harley may have performed better when it came to the exhaust of the motor bike. The long and dark silencer looks a little ordinary and sticks out like a sore thumb on this modern motorbike.

Strong acceleration with instantaneous throttle response is offered on the Street 750 and the bike goes from 0 to 100kmph within 5 seconds. The top speed is almost 170kmph and the bike pulls up smoothly to 180kmph in its top gear. The third gear can be used till 120kmph, the fourth till 145kmph and the fifth till 160kmph. The speeds have been shown on the instruments. The Revolution X engine is smooth and does not have a vibe or buzz. The engine is a powerhouse with enough refinement to allow you to cruise till 130kmph all through the day. At this speed, there is still a lot left in the engine in reserve till it does up to the limiting speed. The engine can be mastered easily and is flexible. It can be ridden in traffic and all the 6 gear ratios are matched will with the power.

A long wheel base typical of cruisers has been provided to the Street 750. It measures roughly 1534mm. Bikers can sit comfortably with a low and back erect posture for riding. The riding posture is supported by set forward footpegs. The saddle for riding is well padded and comfortable in the Street 750. The pillion comfort on the Street 750 could have been increased as the rear seat is not as roomy as they pilot’s. The frame spine of the Street 750 is made of steel and it has support from 7 rims of spoke alloy, front telescopic suspension and dual back shock absorbers that have a rectangle steel section swinging arm.

Compared to other Harley bikes in India, the Street 750 has 2 inches more of suspension travel and 2 inches extra for ground clearance. The Street 750 weighs 222 kilos and it is neither agile nor light. However, it can be managed well without it weighing down even in crowded city conditions of India. The handlebars have been kept wide for proper leverage and the motorcycle can be steered with a neutral and confident feel. The cornering techniques on the bike are quite good and so is the quality of the ride. The bike runs on MRF tyres for both the back and front and they work well to provide the motorcycle a confident grip till reasonable high speeds. When you ride beyond 140kmph, it feels slightly stressed. The traction offered is quite good even when you hustle the bike through consecutive corners.

The bike is manufactured in Bawal Haryana by using numerous important components from Indian parts makers. The bike is priced at Rs 4.10 lakhs ex showroom.

One thought on “Reviewing the Harley Davidson Street 750”