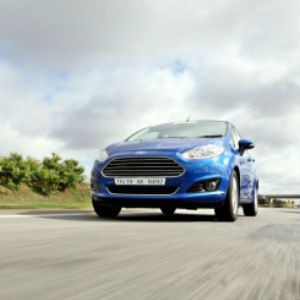 When you see the Ford Fiesta 2014 for the first time, what comes to your mind is the word premium. Not only does the car look premium in terms of features and style, but the pricing of it is quite premium too. The latter turned out to be one of the undoing for the previous Fiesta model. The previous Fiesta model is quite a seller in the user car in Mumbai market though. However, the current model is expected to perform well enough. However, the question arises; will it be as good as the Hyundai Verna or Honda City? It is certainly an area of explorations!

The company agrees that unless the specifications of the Ford Fiesta are localized to a good extent, the price point of it can never be overlooked in a conservative Indian market. The company has decided to take the more costly route yet again because it has launched the car in the diesel variant. Even though it has 3 trim levels, not one of them is going to attract a buyer because of the pricing factor. However, what is alluring about the new Ford Fiesta 2014 is its refurbished interiors, innovative design and top notch solutions in connectivity.

Appearance of the Car

We begin the review with the way the car looks- yes it is certainly an improvement over the predecessor model. The car seems to have an improvement in proportion compared to the older model. The car looks more contemporary from the front quarter and front. It is certainly one of the best looking cars in its segment undoubtedly. The car looks richer with its prominent grille, sleek headlamps and muscular bonnets. At the back, a chrome strip has been mounted on the bumper for enhancing the premium looks of the car. The boot has a lid with integrated spoiler. The tail lamps have been designed to deceive buyers into thinking them as LED units, which they are not. However, what buyers may dislike is the new alloy 15 inch wheels.

Even though the interior’s design is unchanged, it seems a lot more upmarket. A two tone hue has been used on the dashboard and a mesh finish adds a nice and unique feel on touching it. A glossy black coloured plastic has been used on the car’s central console, by the climate controlling system and handles of the door rather than matte silver. This touch improves the car’s appeal certainly. The instrument board also has a black finish instead of silver and there is a shiny finish on the steering wheel and door handle instead of a dull one as in the earlier Fiesta model.

A new multimedia system, called the SYNC has been installed in the Ford Fiesta 2014. It has also been made available on the Ecosport although it feels better here. From emergency alerts to Bluetooth and voice command, everything has been used on it. Moreover, it can also read out aloud text messages apart from letting you toy with your smart phone applications on the move. Right now, only 2 apps specific to India have been launched by Ford but the company is developing more and they will be available on the system soon. For meeting the standards of the class, the features included in the car are keyless start and entry, sensors for reverse parking and controls mounted on the steering along with automatic controlling of climate. Unlike rival cars, the Fiesta 2014 has only 2 airbags and not 6. However, it does have automatic headlamps, wipers and ABS.

However, the problem of spacing remains in the newer model as it was in the older one. The Fiesta has a prominent lack of knee room at the back and it becomes glaring when the Nissan Sunny 2014 and Honda City VW cars have got good spacing at the back. Moreover, the space crunch can be felt by passengers in the back seat as there is a lack of support under thighs. However, the seats in front are cosy, well bolstered and accommodating.

Unlike the earlier model of the Ford Fiesta, which had a 1.5L diesel and petrol engine, the current version of the car has only a diesel version. Also, the automatic PowerShift version has also be eliminated from the car. No new changes have been introduced in the engine in terms of tech specs, torque or power or performance. The engine is the same as before along with the torque and power figures and gearbox. The highest power output is 91PS which can be gotten 3750rpm whereas the highest torque available is 204Nm which can be achieved between 2000rpm and 2750rpm. The gear box in use is a 5 speed one and offers accurate shifting actions and short throws even though it is not as enjoyable to use as some other gearboxes on Ford Cars.

The fuel efficiency rating of the car has gone up because of a reduction in air drag. The fuel efficiency rating by ARAI is 25.01kmpl, which makes it comparable to other vehicles in its segment. Moreover, the NVH characteristics have been improved on the car. For doing this, the tyres were tuned and sealant was used on the body and door and some tougher bushes have been used at the rear beam twist axle. Newer bump stops have been added to front suspension. Apart from these changes, everything is still the same. The Fiesta was considered a class in terms of handling and riding and it continues to hold the place. In a linear drive line, it is quite stable and the car is steady around corners. Even though the driving is not very plush it cannot be classified to be uncomfortable or jerky either.

When you consider the number of changes made in the Ford Fiesta 2014, they may not be enough to set the car soaring on the charts. However, it may bring in new buyers because of the rarity factor and the car is more involved in terms of dynamic. However, there are still a few caveats, particularly the price that the company still has to work on in order to bring in more buyers. You can get a used car in Mumbai of Ford make much cheaper than a new car though!