The Toyota Fortuner is one of the most popular SUVs available in the market. Recently, JLR, owned by Tata Motors has decided to come up a premium quality SUV based on the Land Rover’s present generation SUV Freelander 2. The SUV is being touted as a direct competitor of the Fortuner. The winning model from Toyota is an exception within its class. Rarely does a car manage to hold onto its lead uninterrupted in the wake of tough competition. The Mahindra Bolero and Maruti Suzuki Swift are some of the cars belonging to other segments that have continued to be market leaders. Other models like Honda City have managed to reclaim the top spot after a few upsets. 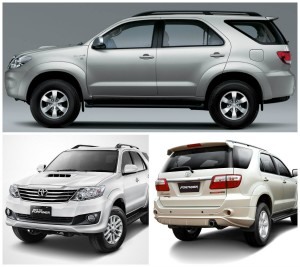 From the house of Japanese car maker Toyota, the Fortuner has been favoured by businessmen, actors and politicians alike. It is one of the older models which have grown in the face of adversity. The vehicle was launched in India in 2009 and it has drawn styling and designs from the bigger model, Land Cruiser. Not only has the Fortuner managed to outpace the other cars in this segment but also capture the majority share in this segment of premium SUVs.

The price of a brand new Fortuner is around Rs 23.32 while you can get used Toyota Fortuner for lesser. The car is one of the expensive models in this segment which has the Ford Endeavour, Honda CRV, Renault Koleos, Hyundai Santa Fe, Chevrolet Captiva, Maruti Suzuki Grand Vitara, Mitsubishi Pajero and Mahindra SsangyongRexton. For the year 2013-14, the market share captured by the Fortuner was around 72 percent and its annual sales amounted to 16,500 units roughly, as per SIAM or Society of Indian Automobile Manufacturers. The segment is experiencing some slowdown. The units sold have shrunk from 24,700 approx. in 2012-13 to 23,000 in 2013-14. Apart from the Honda CRV, Toyota Fortuner and the Mahindra SsangyongRexton, the other car brands in this segment have noted a dip in sales compared to the previous year. The Fortuner’s grip in this segment has only risen through the years.

What worked in favour of Fortuner?

The Land Cruiser’s built akin to a tank and the hefty price tag of more than Rs 1 crore has helped Toyota in building an image of a car maker specializing in off road touch SUVs. The success of Qualis as a MPV also contributed to building the image of Toyota. The Toyota Fortuner was somewhere midway between the two types of cars. The design was inspired from the Land Cruiser while the affordable price and goodwill of Toyota as a good SUV and multi-people seating car has made the Fortuner instantly successful.

Months after the car was launched, Toyota had to close down bookings fearing it won’t be able to deliver the number of vehicles ordered. The Ford EcoSport and Tata Nano are the only two cars which have suffered the same predicament because of excess demand. The stance of the Fortuner is imposing and the diesel engine is capable and has premium quality build. The brand name of Toyota has a strong attraction from car brands which works wonders in making its vehicles popular. In the long term perspective, the Toyota brand has actually helped the Fortuner as buyers are highly satisfied and much positive publicity in the form of word-of-mouth.

Lack of options within competition has helped Fortuner speed past rivals, say market watchers, even though its brand-pull scores are higher than vehicle performance and remain a defining aspect for purchase in this segment.

The Ford Endeavour failed to make such an impression because its capability and stance are not as good as that of the Fortuner. Moreover, the appearance of the car is slightly dated compared to Fortuner. The Pajero Sport may be a good match for this tough SUV but Mitsubishi does not enjoy a wide outreach. The Honda CRV does not come with diesel engine which is much demanded in this segment. The Mahindra SsangyongRexton does not have the build quality that Toyota enjoys and the Hyundai Santa Fei is quite expensive.

Most people who opt for the Fortuner are men around 36 years old who are entrepreneurs or self-employed. They have usually owned vehicles such as the Corolla, Innova and competition vehicles in this segment.

The Mahindra SsangyongRexton is the next big market player although its market share is no match for the Fortuner. The company owned by Mahindra has shown a growth of three percent compared to its sales in 2012-13. From 1783 units sold, it has shot up to 1843 units. Executives from Mahindra have admitted that the Rexton is going along the performance line charted. The company soon expected the sales to be around 250 in a month and that is exactly how it is performing. The Rexton is sold through dealerships owned by Mahindra, post assembly of Kits imported from Korea. The new version called RX6 shall be made available in India shortly. Ford too is looking to replace the current Endeavour with a version which will be made available globally including India.

The Honda CRV too has undergone some changes and a diesel engine shall be introduced in it. Nissan too has revealed the newest version of the X-Trail during the past year, in an auto show and it would be brought to India later on. The biggest competition for the used Toyota Fortuner would be brought by luxury car manufacturers. JLR has already started working on a compact SUV while Mercedes Benz is thinking of launching a GLA Class compact SUV which will be priced under Rs 30 lakhs. Both these cars will be targeting the same segment.

To buy a used Toyota Fortuner, you would have to spend around Rs 15 lakhs or so. The models that you can buy within this range are less than 5 years old and in perfect conditions. Most of these premium SUVs are driven by owners themselves for the tough feel and performance.