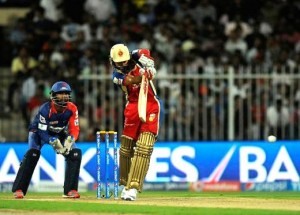 The match between Delhi Daredevils and Royal Challengers Bangalore was a crucial one as it would decide whether DD would make it to the playoffs. The match began 70 minutes late because of a light drizzle. DD had won the toss and decided to field first.

The Delhi Daredevils team kept its fielding tight to restrict the runs for RCB. The bowling attack by DD was opened by JP Duminy who bowled a splendid over to Chris Gayle and Parthiv Patel, the opening batsmen for RCB. Of the first over, they would make only one run. Things seemed very promising for Delhi Daredevils from this airtight bowling attack.

Royal Challengers Bangalore saw its first wicket fall in Chris Gayle, on the 5.3 over. A reckless shot by Gayle led Rahul Shukla to pick up the first wicket for the match. The bowling attack was still in place and Delhi Daredevils was in complete control of the match.

Another blow to RCB’s batting attack came in the 8.1 over when Kohli’s wicket was claimed. He tried running a risky second and was caught shortly off his mark. The score was tallied at 45/2. With two star batmen down from the RCB side, prospects looked bright for Delhi Daredevils.

After Imran Tahir’s first over, RCB was restricted to only 50 runs off 9 overs with 2 wickets lost. It seemed with the bowling attack in place, RCB would not be able to notch up a high score.

Quick runs by Patel off Tahir’s second over and de Villiers hitting a six and two fours off Kaul’s delivery helped to steady the RCB boat. Nevertheless, they had made only 94 runs of 12.3 overs. Shami had managed to claim the wicket of Parthiv Patel with a slower delivery.

With seven overs remaining, Yuvraj Singh came out to bat. RCB lost their fourth wicket as Kaul sent off AB de Villiers to the stand for 33 runs. Yuvraj Singh is joined by Sachin Rana on the pitch. The score stood at 107 for 4 wickets with 5.4 overs to spare.

Yuvraj Singh, who is back in form, took some quick runs for the RCB. He smashed off 3 consecutive sixes off Tahir to bring back RCB in a good position. His aggressive batting fetched him 68 runs from 29 balls, with 9 sixes in his kitty. The final score tally for RCB stood at 186 for 4 wickets in 20 overs.

The total was massive and Delhi Daredevil had to bring on its A-Game in order to take on RCB’s final score. Quentin de Kock and Murali Vijay take to the crease to open the batting order for DD. As luck may have it, Murali Vijay was claimed by Muralitharan and DD’s score stood at 7/1. In quick succession, DD lost another wicket in de Kock to Starc. The score stood at 10/2 for the Delhi Daredevils when Captain Kevin Pietersen stepped out to join Mayank Agarwal on the pitch. With these two powerful batsmen on field, DD manages to stabilize its condition on the pitch. Ten runs were knocked off Chahal which brought up the total for DD to 46 at the loss of 2 wickets.

Winning the match becomes difficult as Pietersen and Agarwal are sent off to the pavilion by Chahal and Abu Nechim respectively. It is up to Duminy and Karthik to work their magic. A six by Duminy bring up the total for Delhi Daredevils to 119/5. They need 68 runs to win off 5 overs- a difficult feat but not impossible to achieve. With the loss of Duminy’s wicket, the possibility of Delhi Daredevils winning the match became bleak.

Nevertheless, Delhi Daredevils struggled to keep their wickets safe and score. They lost the match the Royal Challengers Bangalore for 16 runs. With that, the team’s chances of reaching the playoffs have been wiped clean. Despite that, they have a couple of matches to finish off in a good position.