The Delhi Daredevils played out yet another scintillating contest at home on Wednesday. The team went up into the match, fully charged up on the back of two tight finishes that did not go in their favor. However, luck was not on their side this time too and the results did not go in the favor of the Daredevils. However, anyone who loves and understands the game will doff his/her hat to the team for playing good cricket all throughout and putting up a good fight. 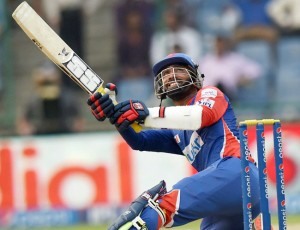 The opponents won by eight wickets but the Delhi team went into the game with proper strategies in the beginning. Based on his experiences, skipper Kevin Pieterson chose to bat on a track that was always going to be good first up. The power play proved to be one area where Delhi could not capitalize, making only twenty nine runs in these six overs. Alongside, the captain himself looked out of touch and scored just six runs. Quinton de Kock scored 10 runs off 9 balls while Murali Vijay started off well for his 24 runs off 20 balls. His innings was laced with a six and a couple of boundaries. The skipper did hit a good boundary but got run out unfortunately after a torrid mix-up with Murali Vijay and this proved to be a big blow for Delhi indeed.

Dinesh Karthik again played a good knock of 36 runs, carrying over from where he left in the last game. His 22 ball innings had four boundaries and a six. He rescued the team along with JP Duminy who played a smashing innings of 40 off just 28 balls with three stupendous sixes. Laxmi Ratan Shukla made 10 while Kedar Jadhav also played brilliantly, scoring 26 off only 15 balls. Once again, JP Duminy and Jadhav combined superbly to give the team some momentum in the final overs. The Daredevils finished at 160 runs in their 20 overs for the loss of five wickets.

This was a good total to defend on the track but the Delhi bowlers ran out of luck nevertheless. Wayne Parnell was once again the crucial bowler for the Daredevils and he struck at crucial intervals, snapping up the wickets of in-form Robin Uthappa and Gautam Gambhir. However, the rest failed to find major breakthroughs and assistance from the track as the opponents fought their way to victory.

Mohammed Shami was decent, conceding only 23 runs of his 4 overs while Parnell took 2 crucial wickets for only 21 runs in his four. Shukla conceded 19 runs in his two overs and JP Duminy went for 24 in his two as well. These overs proved to be a little expensive for the Daredevils with Shahbaz Nadeem and Siddharth Kaul giving away 29 and 34 respectively. The match did not go their way but the Delhi Daredevils should take heart from the performances of their key players including Wayne Parnell, JP Duminy, Dinesh Karthik and Kedar Jadhav. All in all, it was a scintillating contest indeed!

2 thoughts on “Another Scintillating Contest by Delhi Daredevils!”