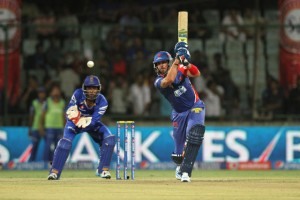 The IPL frenzy reached fever pitch when Delhi Daredevils played their first match at home after returning from the UAE. The fans turned out in full force, the stadium was packed to full capacity and the home team ensured that the audience witnessed a thrilling contest indeed! The match started off on a good note for the Delhi Daredevils with Quinton De Kock playing a brilliant innings of 42 off just 33 balls. He scored the most in the powerplay, hitting five fours and a majestic six. Murali Vijay was dismissed on 13 and skipper Kevin Pieterson could not scale up, being dismissed for 14 in the tenth over.

The same over witnessed the dismissal of Quinton De Kock as well and suddenly Delhi were put in a spot at 72 for the loss of three wickets by the end of the tenth over. However, the team showed brilliant resilience in recovering from this precarious position courtesy JP Duminy and Dinesh Karthik’s 24 run stand off 32 balls. Karthik was dismissed on 12 but Duminy scored a well crafted 39 accompanied by Kedar Jadhav’s quick fire 28 which saw the hosts finishing at a decent total of 152 in their 20 overs.

Wayne Parnell started off things on a great note for the Daredevils thereafter, dismissing in-form opponent  batsman Ajinkya Rahane for only 12 runs. The opponents put together a good partnership which was broken superbly by Shahbaz Nadeem in the 10th over after he deceived Sanju Samson with his flight and guile and Dinesh Karthik executed a commendable stumping. The Delhi bowlers fought hard to keep the opponent team in check and Mohammed Shami got the important wicket of Rajat Bhatia in the 15th over.

However, the Delhi bowlers could not get any more breakthroughs and the opponents managed a tight win in 18.3 overs. The bowling unit however, did a very decent job and Mohammed Shami stood out at the top of the heap with excellent bowling figures of 1 for 22 in his four over quota. Parnell gave away only 35 in his four and bagged a wicket as well while Nadeem had 1 for 30 to show as well. Jaydev Unadkat went wicketless for 36 in 3.3 overs and Rahul Sharma conceded 32 in his three overs which was a little expensive.

However, the overall economy rate and line and length were spot on for the Delhi team and they will go into the next match with a lot of positives. Duminy’s form and Quinton De Kock’s knock will give them loads of confidence for the next game as far as batting is concerned. Everybody contributed and kept the scoreboard ticking and this is something that the team will look to capitalize on further in the remainder of the IPL season.

All in all, it was a hard fought battle and the Delhi Daredevils showcased their mettle with élan. Unfortunately, the results did not go in their favor but the team will take heart from the manner in which it played!

One thought on “A Hard Fought Battle by Delhi Daredevils”