The Mahindra Scorpio is now its second generation and has been selling for over 12 years in the Indian market. The Scorpio has established itself as a robust SUV capable of tackling any terrain. It is preferred not only by semi-urban and rural buyers but also by urban customers in a large scale.  The new generation Scorpio is a much improved product over the earlier generation one and also comes loaded with a lot of contemporary features. The Scorpio comes in a total of seven variants – S2, S4, S4 Plus, S6, S6 Plus, S8 and S10. It is also offered in Four wheel drive and automatic options. The S4 and S10 are offered in 4WD and the automatic transmission is offered the S10 only. There is only one engine option available.

The New Scorpio has a completely redesigned front and rear however, it retains the same overall design of the earlier model. The new Scorpio gets projector headlamps, a new chrome grille, fog lamps and redesigned alloy wheels. The top-end S10 variant also gets projector headlamps with LED lamps, new bumpers with fog lamps, a chrome grille and LED tail lamps. There is a black dual tone cladding on the rear door, side claddings on all four doors with Scorpio branding and the chrome bezels on the fenders. The headlamp assembly also incorporates a cornerning lamp. The bonnet has a prominent scoop that adds to the muscled look. The doors and the roof are a carryover from the earlier Scorpio. The top of the line variant has 17-inch alloy wheels, while the rest run on 1-inch wheels. 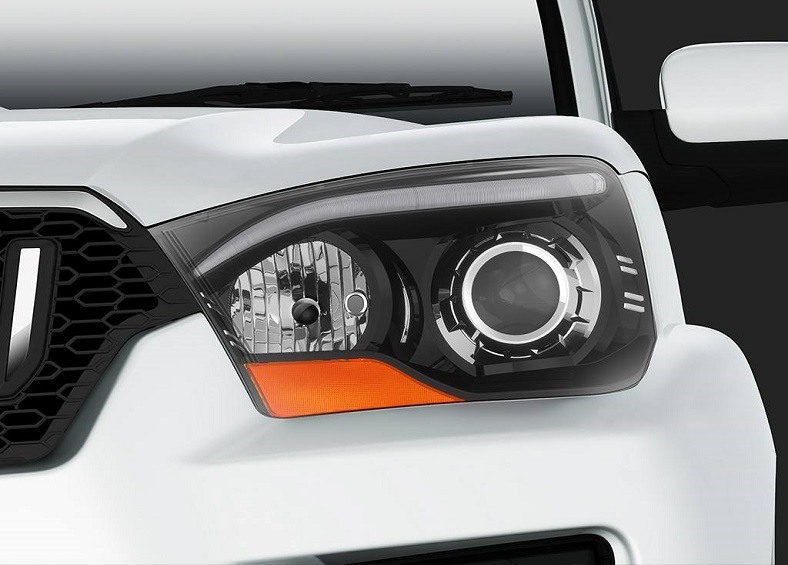 The Scorpio now gets a brand new set of interiors are stylish and certainly a big step up in design. The quality and fit and finish is superior to the earlier generation and packs in lot of features such as  top variant of the new Scorpio comes with automatic climate control, reverse parking sensors, six-inch touchscreen infotainment system and multifunction steering controls and voice enabled interface . The instrument cluster is all new, the upholstery also has been revised with a dual tone combination of grey and blue. Mahindra has also included height adjustment for the driver’s seat. It has rear AC vents and af few cubby holes to hold bottles, cans or other things like mobile phones.The interior space remans the same as before with seven seats. The third row of seats are jump seats that can be folded to alloe extra luggage to be fitted inside. 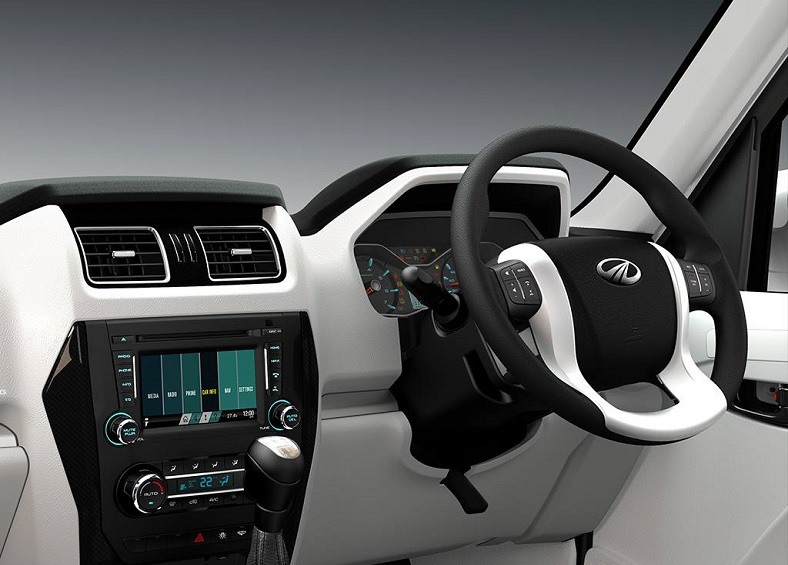 The Scorpio comes with two engine options – one is the 2.5-litre diesel DI and the other is the 2.2-litre mHawk. 2.5-litre engine is more suited for rural use while the 2.2-litre engine comes with a power of 120bhp and 280Nm of torque and is more flexible in terms of performance. The engine behaves very well be it city driving or highway overtaking maneuvers. There is enough torque available in any gear and downshifting is minimized. The engine comes mated to a five-speed manual transmission. The gear shifts on the new Scorpio are far superior to the previous one. The gear lever is a tall one. The ride feels a bit stiff, specially on bad roads. The high-speed stability has been improved on the Scorpio and the vehicle behaves well at triple digit speeds.

The four-wheel drive versions shift on the fly knob for east transition from 2WD to 4WD.

Fuel efficiency of the Scorpio is about 10km/l in the city and 14 km/l on the highway. The automatic version sees a drop in efficiency by about a kilometer.

On the safety front, Mahindra has included dual airbags as well as ABS with EBD. It has a feature called Panic Braking in which the hazard lights come on automatically in the event of a panic braking situation to warn other vehicles on the road. It has central locking too.

Fit and finish in certain areas