The Delhi Daredevils played out three tough finishes at the Ferozshah Kotla stadium in recent times. Experts and critics acknowledged the quality cricket that Delhi was playing but luck ensured that they did not get over the line. Saturday was no different for the Daredevils but heart wrenchingly the match was snatched from their grasp by factors that were beyond their control. The Daredevils lost the match courtesy the Duckworth Lewis method owing to rain and this proved to be a spanner in the works as far as the team’s efforts to move ahead in the competition were concerned. 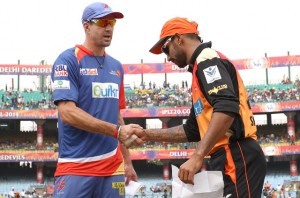 The Delhi Daredevils suffered an early blow with the dismissal of Quinton de Kock for only 7 runs. However, the ship was steadied by Mayank Agarwal and Kevin Pieterson who combined well for a 44 run partnership. The captain scored a good 35 runs while Agarwal had 25 runs to his credit. Alongside, Dinesh Karthik continued his good form with a solid 39 runs to lift the team to a respectable position. Laxmi Ratan Shukla also contributed with a decent 21 runs. Men in form, JP Duminy and Kedar Jadhav could not up the ante this time and were dismissed for only 4 and 5 respectively.

These two finishers had just one bad day in recent times and this affected the team, which could not scale up beyond 143 runs in their full quota of 20 overs. For Delhi, it was a decent score considering the nature of the conditions and the fact that the opponents put them into bat on a tough wicket. It was overall a good challenge for the opponents who had not been in good form recently. The Daredevils started off fabulously with two early wickets and set up the match nicely for a thrilling finish.

Siddharth Kaul picked up the crucial wicket of Shikhar Dhawan while Rahul castled Aaron Finch for only 4 runs with a gem of a delivery. The two leading batsmen back in the hut, Delhi Daredevils geared up to stamp their class on the game but luck was clearly not on their side. Due to rain interruptions and the enforcement of the Duckworth Lewis method, the opponent team had to chase down a paltry target of 43 in five overs which was always going to be peanuts considering the nature of the Twenty20 format.

As a result, the opponents trudged to an eight wicket victory courtesy the Duckworth Lewis method and Delhi were left ruing their luck after a good start. Looking at the way the Daredevils started their bowling campaign, one had no doubts as to the tight contest ahead. Luck did not rule in the favor of the Daredevils and they will be hoping for better fortunes for the matches ahead. The way the bowlers started and the return to form for the skipper were some of the positives from the match. All in all, it was a good start that ended in vain for the Delhi Daredevils!

4 thoughts on “A good Start ends in Vain for Delhi Daredevils!”